If all women are required to cover their hair and bodies with maximal modesty, some women in Hasidic neighborhoods of Jerusalem now wear a burka-like veil over their clothes, in imitation of Islamist female garb.... 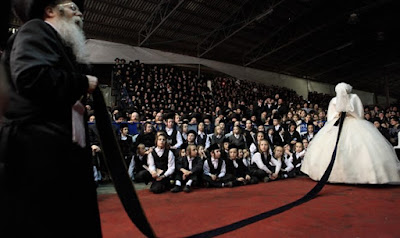 ....In recent times, in some of the most populous centers of Hasidism, notably the domain of the Satmar Hasidic community in Brooklyn and elsewhere, the more sinister cultish side of Hasidism has been on prominent display. With their notorious history of closing ranks around male community members guilty of sexual abuse, domestic violence, and various types of financial criminality, the Satmars have, in effect, revised the Besht’s cardinal insight that everything can become a route to God to something more like, “Everything outside our community is irrelevant, exploitable, or a path to mortal sin.” It’s a dramatic retreat from the Besht’s world-embracing, profoundly joyous vision of Judaism. But as Hasidism reveals, some of the dangerous, structural tensions in the Hasidic project were there from the start....

The tsaddikim “served as intercessors,” write the authors, “providing the channels through which their followers could commune with the divine.” Indeed, the Besht himself supposedly remarked of the Maggid: “He doesn’t just know the Torah, he is the Torah.” It’s hardly surprising that the veneration such a stature inspired could veer close to idolatrous reverence. Some of the Hasidic tsaddikim were altruistic, theologically dynamic community advocates; others were crooks, charlatans, and vainglorious petty despots. The institution of the tsaddik was only as benign as the character of its individual representatives.....

In time, most Hasidic leaders came to identify all forms of innovation with corruption. As Rabbi Simcha Yisakhar Halberstam remarked at the start of the 20th century,


experience has taught us much, that all those who sought to innovate and to eliminate any item from the ancient practice have brought upon us an erosion and destruction of the fundamentals of the faith, and consequently we must not shift even in the slightest and only conduct ourselves as our ancestors have.

It no longer mattered that the ideal behavior of the ancestors was itself quasi-mythical, or that the movement defending this ancient, imaginary essence of the religion was itself a product of modernity.

The end result was chillingly intolerant.

Much of Hasidism’s rich variegation was lost in the aggressive campaign to reach a state of total fundamentalism. As the movement became increasingly aligned with Ultraorthodoxy, which shared its cultural antipathies, if not always its approach to prayer or study, Hasidism grew more homogenous still. The tremendous losses suffered by the Hasidic community in the Holocaust reinforced the movement’s most reactionary tendencies.

Hadisim’s radical conservatism plays out on the family front in dictatorial control of sexuality and a rigid gender segregation that usually relegates women to the role of childbearing facilitators for the temple-and-study centered lives of the men. When Hasidic women leave home to work for money, as is increasingly necessary in this poverty-stricken community, it’s so that Hasidic men can perform the real work of service to God. Beyond the longstanding social constraints, Hasidism also describes a “one-upmanship” that’s taken hold in some quarters whereby community members flaunt their respective fundamentalist credentials. If all Hasidic men wear side-locks, some today grow their side-locks longer and longer. If all women are required to cover their hair and bodies with maximal modesty, some women in Hasidic neighborhoods of Jerusalem now wear a burka-like veil over their clothes, in imitation of Islamist female garb.

It’s difficult to believe that the lure of the outside world has not grown in tandem with the increasingly punitive approach to piety and life as such. Yet, with its high fertility rate, the Hasidic population continues to grow at a rate well above average. And leaving the folds of the community has proven to be a challenge few people can successfully accomplish.....


READ IT ALL & WEEP!
https://lareviewofbooks.org/article/the-hasidic-question/#!