It's the Cover-Up Idiots! The Tendlers Were Kept Around Teenage Girls and Women for 20 Years While the RCC and YULA Did NOTHING! 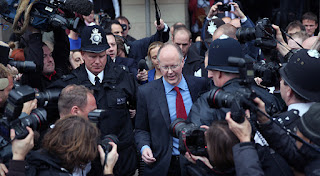 The police are also inquiring into what they have called abuse on an “unprecedented” scale possibly involving more than 200 girls, some on BBC premises. And, on Tuesday, Prime Minister David Cameron’s office said the government order its own inquiry after the existing investigations.

LONDON — The director general of the British Broadcasting Corporation on Tuesday defended the institution’s handling of a burgeoning sex abuse scandal involving one of its best-known personalities, saying the corporation was not trying to “avoid answering questions” and had begun inquiries that were “the opposite of an attempt to hide things.”

In his remarks, Mr. Entwistle expressed “horror” at the scandal.

The director, George Entwistle, was appearing before a parliamentary panel that has played a major part in investigating Britain’s phone hacking scandal and is known for its often abrasive interview techniques.

But in more than two hours, Mr. Entwistle seemed to parry most questions, falling back frequently on the argument that formal inquiries that he has commissioned at the BBC would resolve some of the issues. Denying accusations of a cover-up, he expressed “horror” at the scandal and said it had raised questions of trust and reputation for the BBC. He insisted that his direct knowledge of the episode was minimal, prompting panel members to mock him for what they called an extraordinary lack of curiosity about events around him.

The hearing came just a day after the BBC broadcast an examination by the “Panorama” program into a decision by the editor of another program, “Newsnight,” to cancel an investigation last December into accusations of abuse against Jimmy Savile, an iconic showman once depicted by the BBC as a national treasure.

“There is no question in my mind that this is a very grave matter indeed,” Mr. Entwistle said.

“I would accept that there have been times when we have taken longer to do things than in a perfect world I would have liked,” he continued. “But I think if you looked at what we have achieved since the scale of the crisis became clear, I think you see we have done much of what we should have done and done it in the right order with proper respect paid to the right authorities.”

It was not possible to look back on the decades of Mr. Savile’s behavior “with anything but horror that his activities went on as long as they did undetected,” Mr. Entwistle said.

Asked whether sexual abuse was endemic at the BBC, as some victims have suggested, Mr. Entwistle said he did “not have enough of a picture to know it was endemic.”

But he went on: “There’s no question that what Jimmy Savile did and the way the BBC behaved — the culture and practices of the BBC seemed to allow Jimmy Savile to do what he did — will raise questions of trust for us and reputation for us.”

The BBC has instituted two formal investigations, one into its culture over decades and one into the specific details of the canceled “Newsnight” program. Mr. Entwistle said the “scope and scale” of those inquiries was “as wide as it should be” to fully investigate the scandal.

The police are also inquiring into what they have called abuse on an “unprecedented” scale possibly involving more than 200 girls, some on BBC premises. And, on Tuesday, Prime Minister David Cameron’s office said the government order its own inquiry after the existing investigations.

David Jordan, the BBC’s head of editorial policy, told the panel that since the period when some of the abuse has taken place, the BBC has tightened its rules governing the protection of children on its premises. “The sorts of things that happened, where people were allowed to be taken into the dressing rooms of stars, as has been alleged, should not and could not happen today.”

The BBC announced on Monday that the editor of “Newsnight,” Peter Rippon, was “stepping aside” while the episode is investigated after it was found that his explanation of the cancellation was “incomplete” or “inaccurate.”

Mr. Entwistle said there was no question of managerial pressure on Mr. Rippon to cancel the investigation. “The decision was made by Peter Rippon,” he said.

Mr. Entwistle, who took over as director general on Sept. 17, was also questioned about a conversation he had last December at a time when the BBC was planning a series of glowing, year-end tributes to Mr. Savile, who died last year at 84.

At that time, Helen Boaden, the BBC’s director of news, told Mr. Entwistle at a lunch that the investigation by “Newsnight” could have an impact on year-end schedules and he might have to change them.....