I DON'T CARE HOW MANY PEOPLE LEARN DAF YOMI!

The major advances in medicine, science, electronic technology, information technology and the judgment of history will prove over the next decade or two that fanaticism without intellect can not persevere in Judaism. The utter self destruction of the Arabs by themselves is cause for us to be reflective on the eventual Haredi self-destruction. Ultimately the only ingredient of a suicide bombers' makeup is faith in a myth. Not life, not reality, but belief in their insane leaders and their violent rhetoric, and martyrdom for the greater good or their cause.

If Haredi Judaism can only exist and sustain itself through blind faith and trust in their fanatical leaders, Haredism will collapse over the coming decades. I believe we can expect to see over the next decades the following:

Metziza B'peh will have caused untold amount of deaths and illness in babies subjected to this practice.

Technology will have permeated nearly every home and business via the telephones, computers, radios and other forms of mass communication unimaginable today.

Science will confirm convincingly that the planet Earth is billions of years old and "man" lived 100,000 plus years ago.

History will once again have demonstrated that appeasement of the enemy will put Israel on the brink of destruction. The only option for Israel to survive as a viable Jewish state is to destroy their enemies that threaten their existence.

In order for Judaism to survive it will have to have created a viable Yiddishkeit through yirah m'ahava the love of God through love not fear of a bogeyman, that will punish you for every real, imagined or manufactured sin. As the unequivocal truth of an old universe seeps in to the Haredi mainstream, as the medical evidence will certainly demonstrate that metziza b'peh is a potential danger to the child if the mohel is infected; the Haredi created Judaism, the one that befuddles the truths, the myth of the incompatibility of Torah and science and medicine (selectively), will be exposed as the fraud that it has become.

When very old men or men without any knowledge of the facts, or men who make a very ruthless calculated decision, that it's OK to lose some babies to metziza, than have a government capable of monitoring their rituals, the destruction of emunah to the masses will be geometric. The narrow minded, and the wicked and ignorant will be responsible, only then will it be too late.

Judging by the thousands of e-mails I have received since the Torah Temimah sanctioned molestation of children; who chose viciously to rather hush it up by the Scheinbergs and the Belskys than deal with it, thousands have strayed from the emunah pshuta, that our rabbonim are anshe emes, men of God. Add to the fact that nobody is presently dealing with the problem other than Rabbis Blau and Dratch in a meaningful way, the outrage is explosive! If this keeps up, which it very well may, Haredi Judaism will evaporate as a meaningful form of Judaism as Chabad is disintegrating into the global soup kitchen it has become.

The fascination with UOJ has become unreal. The anger, love, hate......is good, it has made most people passionate. The issues are on the table for the seeing person to see. There are hundreds of Jewish sites, maybe thousands, why come here? Why the dastardly attempt to destroy UOJ? Why permit lashon hara and motzei shem ra, when you're willing to cover for a molester by using a corrupt and evil person and a bogus bais din to issue a hazmana to a person accused of spreading rumors? How evil does one get under the disguise of halacha? How corrupt does one have to be for it to become so transparent that he should be physically removed from his position if necessary? I'm not condoning violence, I'm asking a simple question. HOW CORRUPT IS CORRUPT FOR YOU TO DO SOMETHING ABOUT IT?

The sad answer is that present Haredi Judaism can not pass self scrutiny. It can survive ONLY in ghettos and Bin-Laden style caves. The doctrine of gedolim infallibility is paramount, no matter how bizarre; that they are willing to destroy you, me, anyone and everyone that does not buy into that notion of incredible stupidity. Even my greatest critics on the historical fact that R' Elchonon chose death over the fear of the treifena medina America, will concede that he did make a mistake. Infallible? Hardly!

So what I've attempted to do, often times in a rude and crude manner, is to make the Torah and the rabbonim transparent. I intentionally write in a manner to create controversy and passion, no regrets whatsoever. How else was I going to capture the attention of hundreds of thousands of comatose Jews. Ani maamin b'emunah shleima, I believe with full faith, that Torah and science is reconcilable, that medicine and ritual practice can be compatible, that the Internet can be used for good and bad, just like money can. Did anyone recently attend an asifa banning the use of money? Yes, we can believe all this and not be an Apikorus!

The untoward facts are that truly observant Jews are decreasing in numbers. Poverty, ignorance, nonsensical and deadly dogma, corrupt leadership, are all contributing factors. Regardless of how many babies are being produced, children and adults DO NOT want to be impoverished intellectually or financially.

The rabbinical terrorists and their suicide bombers plan to destroy your way of life. Do you have the brains and the guts to fight them now or are you willing to see Yiddishkeit self-destruct under the falsehoods and voodoo Judaism led by these Jewish Fascists in beards and black clothing?

Choose life as Rabbi Michoel Ber Weissmandel zt"l did...Judaism is life, the living Torah, not the poisonous distortions of Pinchos Scheinberg and Yisroel Belsky and their gang of Torah perverters!


THE UOJ CLASSICS: A MUST READ OF THE COMMENTS!
http://theunorthodoxjew.blogspot.com/2006/08/chaim-neuhoff-is-hizbelsky-suicide.html 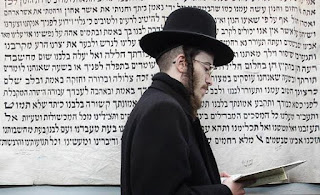