The ultra Orthodox Jewish ritual of metzitzah b’peh requires a practitioner to orally suck the penis of baby to ‘cleanse’ the open wound following its circumcision, making them vulnerable to the virus... 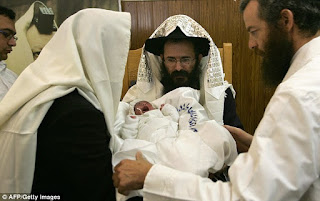 These latest cases bring the total count to 13 infants since 2000, two of which suffered brain damage and two died from the virus which can rapidly spread throughout its body.


The ultra Orthodox Jewish ritual of metzitzah b’peh requires a practitioner to orally suck the penis of baby to ‘cleanse’ the open wound following its circumcision, making them vulnerable to the virus.

The department of health says one of the latest infants to contract the virus developed a fever and a lesion on its scrotum, seven days after the procedure. The boy later tested positive for HSV-1. That virus differs from HSV-2, the genital herpes, which is contracted during sexual intercourse.

‘A herpes infection in a newborn baby has the risk of leading to severe illness and death,’ Jay Varma, deputy commissioner for disease control at the New York City Department of Health and Mental Hygiene told ABC News.

‘The reason is that the baby doesn’t have the same fully developed immune system as an adult. Instead of staying in the genital area, it extends throughout different organs in the body,’ he explained.

He said it’s too soon to tell whether the boys will suffer permanent effects.\

The identify of the rabbi who performed the circumcision is being withheld by the boys’ parents, preventing the health department to step in, they said.