Oddly reluctant to cry ‘hate crime’ - So why isn’t shouting “Kill the Jew!” while stabbing a Jewish student in a temple enough to raise the hate issue? 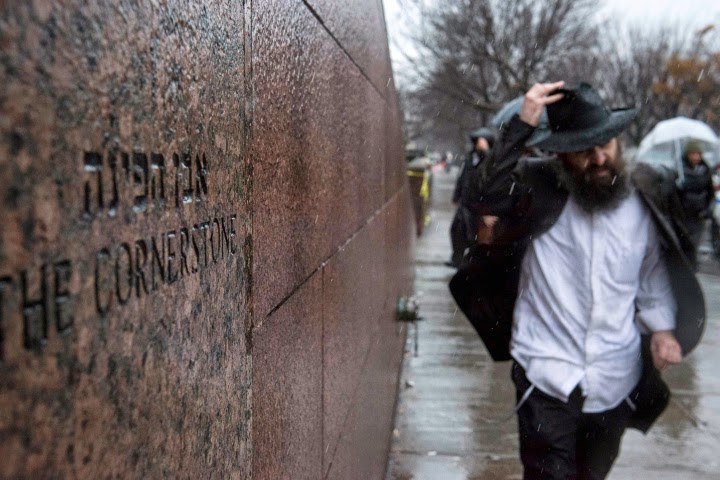 When someone enters a synagogue with a knife and stabs a rabbinical student there, it sure looks like a hate crime. Multiple witness reports that the attacker shouted “I want to kill the Jew!” seem a clincher.
Yet the NYPD and most media seemed strangely reluctant to acknowledge that angle in the early wake of Tuesday’s attack in Brooklyn.

The NYPD officers’ conduct in responding to the attack was exemplary. A video shows the immense restraint of a policeman repeatedly demanding the suspect drop the knife.

It’s only after the suspect appears to surrender as he sets the knife down, but then abruptly grabs the knife, continuing his threatening gestures and advances that the police, left with no choice, use lethal force.

Happily, the victim, 22-year-old Levi Rosenblat, was in stable condition yesterday, recovering from stab wounds to the head.

Media accounts near-universally mentioned that the knife-wielding suspect reportedly shouted “I want to kill the Jew!” and “Kill the Jews!”

But some stories feature the police saying he may have said only, “I will kill all of you” — though, again, in a synagogue, that’s still pretty telling.

Remarkably, the New York Times account didn’t even see fit to mention any “kill the Jew” statements, though it did link to a Chabad.org article noting that “according to witnesses, the perpetrator was heard repeatedly saying: ‘Kill the Jews!’”

Yet the Times only reports the part caught on video where the suspect tells worshipers, “You want me to kill you.”

That the suspect may have yelled stuff about killing Jews wasn’t the focus of any articles I found.

Contrast that with the tale of Ahmed Aden, a mentally disturbed Kansas City man who intentionally ran over a 15-year-old boy outside a Kansas City mosque — which the media quickly (and correctly) highlighted as a potential hate crime.

It helped that news swiftly broke that the perp had made prior anti-Muslim statements — on the other hand, no reports tried to suggest it wasn’t a hate crime because the man was also delusional and mentally ill.

So why isn’t shouting “Kill the Jew!” while stabbing a Jewish student in a temple enough to raise the hate issue?
An initial NBC New York reports stated that the police weren’t even investigating the Brooklyn attack as a hate crime. Police Commissioner Bill Bratton is now saying that the hate-crimes unit is investigating.

That seems mandatory: State law defines a hate crime as a “crime committed when an offender selects a victim because of a belief of perception about the victim regarding race, color, national origin, ancestry, religion, religious practice, age, disability or sexual orientation.”

The 49-year-old suspect wasn’t robbing anyone or committing any other known crimes. Before viciously stabbing the student in the head, he entered the synagogue asking for a Bible. His actions and ramblings certainly suggest mental issues, but that does not rule out anti-Semitism.

That the knife attack echoes the recent deadly hatchet attack in a Jerusalem temple even suggests a copycat hate crime.

Today, the mere fact that a cop is white and a suspect is black is enough for much of the media to quickly imply racial motivations in shootings. This makes the silence deafening when the same media ignore the strong likelihood that the Brooklyn assault was anti-Semitic.

Hatred of Jews and Israel is spreading around the globe like wildfire. Recently, a 19-year-old woman was tied up and raped in a horrific anti-Semitic attack in France.

If we’re not willing to acknowledge the motive in these attacks, we’re inviting more of them.