The Rebbe called a meeting on Sunday of the Rabbinical Association, which will announce a huge protest rally in front of the of Israeli Consulate in Manhattan on Tuesday...

Thousands of Satmar Hasidim are expected to protest Israeli Prime Minister Benjamin Netanyahu while he is planned to deliver a controversial address to a joint session of Congress. 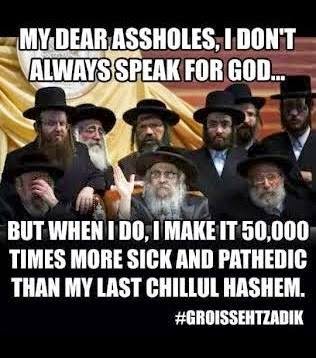 During a dinner on Saturday night in Borough Park, the Satmar Rebbe, Reb. Zalman Leib Teitelbaum, stated that the imminent arrival of the “prime minister of the infidels” (Netanyahu) to Washington to provoke the exalted president, is a reason to protest.
The Rebbe called a meeting on Sunday of the Rabbinical Association, which will announce a huge protest rally in front of the of Israeli  Consulate in Manhattan on Tuesday.
“Most of the Torah observant in the land of Israel are part of the government, and enjoy a meal with that wicked one, and it is blinding their eyes and they say they could adhere to a compromise with such a wicked decree regarding recruitment,” the Rebbe said. “There is now an Arab in the elections and all the religious parties declare that it is a sacred act to vote to fight the draft law. But anyone who has sense can see that all the parties could not cancel even one step of the decree, maybe this time it’s time to admit that the Sabra who fights from within is no longer beneficial, and thank God there are thousands of others who already have seen the truth and have declared now that they will not vote in the upcoming elections.”
“It is your job to help and strengthen the functionaries engaged in propaganda against the electoral process and strengthen those who declare now they will not vote in the elections,” Rabbi Teitelbaum declared.

Photo: Shmuel Lenchevsky
With considerable anguish the Rebbe added, “It has been several months that they are talking about the arrival of the unbeliever, Mr. Netanyahu to Washington to speak. It is an unparalleled desecration of God, a serious provocation against the nations. And even the Zionists admit that the US is their best friend … and now he wants to come to provoke the US President. And precisely at this time that the hatred of Israel exists all over the world, and Jews are in a state of danger all the time, it brings down great wrath; and we as Jews who are loyal to God and the teachings should make it known that we have no connection with the Prime Minister.”
“I will speak with rabbis and the rabbinical association members in order to organize a mass protest rally on Tuesday in Manhattan in front of the Israeli [Consulate], and publish journalistic articles that announce that we have no part in the actions of the prime minister of the infidels,” he announced.
Reb. Zalman’s brother, Reb. Aharon Teitelbaum, the Satmar Rebbe of KJ, recently called Netanyahu ‘vile’ and ‘despicable’ for challenging President Barack Obama on the looming Iran deal. “All this behavior (of Netanyahu) contradicts the internationally accepted diplomatic rules and all the other Zionist heads of government were sure to keep the same rules,” he said. “Israel receives from the United States more than any other country receives, and what gives him the chutzpah so that he dares to come and challenge US President. He is not a mensch, he is not a diplomat, he is vile and despicable.”