In the Torah it does not say, “And on Wednesday, God created many, many suns that from afar will look like many, many stars whose light will reach Earth after light-years of travel......” 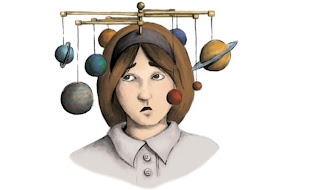 Every day we lose an untold amount of kids because of their inability to reconcile Torah and science. Thanks to the yeshivas and Bais Yaakov girl schools who refuse to address this urgent issue.....as it will only get infinitely worse!

On a Tuesday in July 2007, I learned that the sun is a star. A friend of mine, formerly Hasidic, told me the secret. She informed me that the heavens look nothing like we think. I said, “Huh?”

“Look,” she said reasonably, “I swear. It explains it here, in this incredible astronomy book. The sun is a star, a medium-sized one — and just one of millions in our galaxy…”

She looked at me, waiting for my wonder. “Stars,” she said, pointing enthusiastically up to the clouds, “can also be suns.”

I looked suspiciously at the book in her hand. I turned away. I sat down heavily on the steps, pulling my maternity shirt over my swollen stomach. Good God. She actually believed that stuff. The school we attended, the ultra-Orthodox Bais Yaakov School, did not teach us astronomy. But, still, we know the sun is not a star.

No, the sun is The Sun. The one with six to nine planets around it. The one God created after painstakingly reading the Torah instructions. The one, and the only one, in this universe, lighting our way along with the single moon and the myriad stars.

I patted my friend on her shoulder. I told her it is okay — we all have mental breakdowns sometimes. She went on. It’s the way it is with breakdowns. She spoke about light years, the distance between stars. She talked about elements forged in light and stars, rambling for minutes at a time. It was disturbing. It is one thing to demand that the sun is a star, perhaps a matter of linguistic interpretation, but that other stars are suns, too — with planets around them — whole galaxies impervious to and in complete contradiction to His orders? God would never betray us like that.

It is not that we disagreed about the fact that light travels. It does — just not very far. I explained this to her. I tried to make her see the logic. It was simple, only one sentence long and in the Torah: On Wednesday, God created one sun and one moon. Separately, He created stars. In the Torah it does not say, “And on Wednesday, God created many, many suns that from afar will look like many, many stars whose light will reach Earth after light-years of travel......”

EVERY PARENT HAS A DUTY TO READ THE ENTIRE ARTICLE: http://forward.com/articles/162232/the-sun-is-a-star/?utm_source=Sailthru&utm_medium=email&utm_term=The%20Forward%20Today%20%28Monday-Friday%29&utm_campaign=Daily_Newsletter_Mon_Thurs%202012-09-06
Posted by Paul Mendlowitz at Thursday, September 06, 2012 15 comments: