Hey...it's been a while since we communicated directly. It's sure nice to see you checking in on my blog - like 40 times each day.

Seriously now, remember when we hardly knew each other -- like two years ago, when I respectfully asked for an invitation to address the urgent issue of child sex-abuse in the Orthodox Jewish community --- at the Agudah Convention? Sheesh...those were the good old days Avi. You were the "big macher" --- I was the "lunatic blogger". My, oh my --- seemingly our nicknames have switched owners. Dats life --- one day you're a macher --- the next day you're a lunatic!

So bubele ---- let me try again. You seem to be headlining the Convention with the "Kashruth" theme. I understand you will be having cows in every room (not the ones from Borough Park - those are behaimas) - nice twist instead of the Agudah yarmulkes --- ya know with the embroidered picture of a Catholic priest in heat.

I know a few things about kashruth and behaimas myself. Not as much as say - Nat Lewin - but enough to fake it and be entertaining at the same time. Whaddya say Avi --- we bury the mohel's hatchet, kiss and make-up, naa bad idea -- just let's make-up, send me an invite to speak, and let by-gones be by-gones. You may even get to like me if you gave yourself a chance. I'll even lay off the pummelling of you for a week or so.

I'll give you back your title as "big macher"... in truth - you truly deserve that honor - because Gertzulin tells me you've been walking around with full pants since we "met"..... Give me enough notice so I can stop off at Bencraft for a new hat.

Hope to hear from you --- regards to the boyz!

"Personally, I'm looking forward to the fressfest. I can't wait to see who they trot out there to defend the Rubashkins and cry out "ant-semitism, nazism, blood libel, etc." This line of defense and excuses would be so laughable if not for the tragic state that Orthodox Judaism is in. Between the kashrus scandals, the child sexual abuse plague, "frum" white-collar crime, OTD teens, lack of formal education in yeshivos, the abuse of the kollel system, the geirus industry, political in-fighting, modesty patrols and ridiculous bans, you would think that this self-appointed representative organization of Orthodox Jews would have more important things on their agenda than trying to resurrect a totally corrupt meat business. Not just any corrupt meat business, but a family business that was deceiving unwitting kosher consumers for over twenty years and showing a total disregard for both religious and secular law. WHY???

The answer is simple, just like it was two years ago when they dedicated their plenary session to UOJ: HEF$EID MERUBAH!!!! Too many chashuva families and companies were benefiting from the Rubashkins. From the rav hamachshil, to the meshichist shochtim, to the muzzled and blindfolded "mashgichim", to the licensing, er, kashrus agencies, to the PR firms, to the heilige lawyers, to the yeshivos who received "charity" in return for lucrative contracts, and last but not least, the Pesach hotel-type fressers who care more about their stomachs than the massive chillul hashem and their own timtum halev. To the Agudah, this is an emergency situation! MI YAACHILEINU BASSAR??? Or better yet, MI YAACHILEINU MAMON??? First amendment rights! Meat shortages! Vayishman Yeshurun Vayivaat Shamanta Avita Kasita! We need twenty more years of Rubashkin abuses, chillul hashem and treifos!

Two years ago, after UOJ exposed the child sexual abuse plague and coverup in our midst, instead of planning an emergency session to deal with this scourge, they decided to attack the messenger. WHY??? They need to protect the status quo!!! HEF$EID MERUBAH!!! Who will come to our next dinner if the truth is exposed? What if we get sued and have to pay a settlement? What if some yeshivos get sued? Oy vey! This is their only concern. Not the children, not the community, not kashrus, not Torah, not chillul hashem, not education, not peace and tranquility, not ahavas yisroel, NO!!! MONEY!! That's all that matters. Elokei Kessef Veelokei Zahav! That's what's on the agenda. Pass the pastrami."

The NY Times and The Jewish Week stories...Hikind subpoena...Yudi and Lipa, look at what you have wrought. Think back a couple of years to UOJ's offer...Yudi leaves YTT and everything goes away...sounds like a pretty good offer now, doesn't it? Stupidity and Gaiva...what a price to pay. 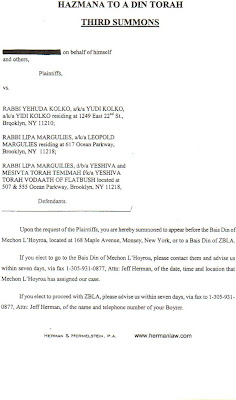 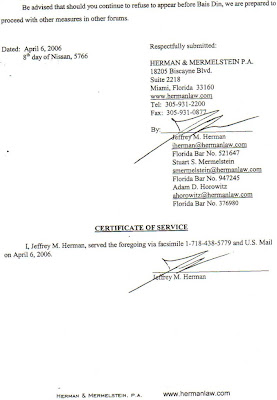 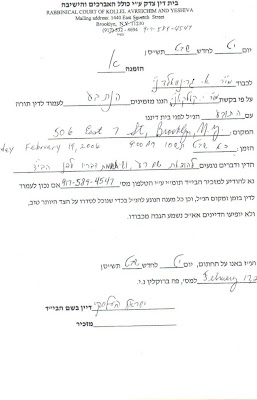