From the outside, Rabbi Menachem Chinn of East Windsor observed the strictures of his Orthodox Jewish faith, from his beard to the head covering that stood in marked contrast to the yellow jail uniform he wore to his court appearance Friday morning. 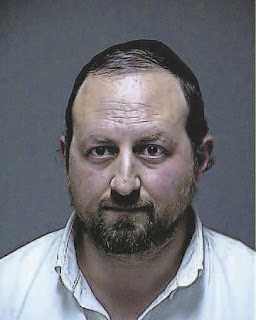 From the outside, Rabbi Menachem Chinn of East Windsor observed the strictures of his Orthodox Jewish faith, from his beard to the head covering that stood in marked contrast to the yellow jail uniform he wore to his court appearance Friday morning.

Chinn, a 40-year-old married father of six children, admitted he had sexually exploited two young boys — who were students of his at separate times in 2005 and 2012 — when they were under the age of 13. One of the incidents, Chinn admitted, took place in the school where he had taught, the Shalom Torah Academy. The victim in that case, now a young man, was sitting in the courtroom of Mercer County Superior Court Judge Peter E. Warshaw, in Trenton, to watch Chinn finally admit his criminal actions.

“It was very hard, but at the same time, he’s getting what he deserved,” the man said of watching Chinn in court.

In return for pleading guilty to two counts of second-degree endangering the welfare of a child, Chinn will avoid going to prison, getting two suspended five-year-terms to run concurrently, but he will have to register as a Megan’s Law sex offender and be parole supervised for life.  His sentencing is scheduled for Oct. 13.

Asked about why Chinn will not be going to prison, Casey A. DeBlasio, spokeswoman for the Prosecutor’s Office said by email, “Actually, under the terms of the plea agreement, he will be sentenced to five years of prison time, but that sentence will be suspended as long as he meets all of the conditions. Should those conditions not be met, or he commits a new offense, he would then serve that prison time.”

China was due to be released from jail Friday, although his travel outside the home is restricted to such things as visiting a doctor or attending religious services. He cannot have unsupervised contact with minors, including his children.

“We’re just grateful for the continued support of his family, his wife and the community,” said Chinn’s lawyer, Steven D. Altman, outside of court afterward.

The case against Chinn evolved quickly, even though the victims waited years to come forward to law enforcement. In April, he was charged with sexually assaulting a then 12-year-old-boy in Chinn’s home in 2012, the Mercer County Prosecutor’s Office and East Windsor Police announced.

Subsequently, a second victim claimed that Chinn had sexually assaulted him in 2010 and 2011 as a teenager. The same victim in that case then alleged an earlier incident, in 2005, when he was of a middle school age.

The Prosecutor’s Office and  Chinn’s lawyer sought to reach a plea bargain to end the case in a matter of months. Originally due to be in court Thursday, Chinn had his appearance rescheduled to Friday.
In handcuffs, he walked into Warshaw’s courtroom under the watch of sheriff’s officers, as the victim in the 2005 case and others stood in the hallway watching.

“Yes,” Chinn replied during the proceeding.

Later, Altman walked Chinn through the factual basis to lay out what he had done, first in the April 2012 case that occurred inside Chinn’s East Windsor home. The victim, who was not in the courtroom, was under 13 years of age at the time and a student of Chinn’s.

Then, he pleaded guilty to the earlier incident, from November 2005, at the school.

“After all these years of being victimized, I can only be thankful that he’s no longer going to be able to put anyone else at harm, within the community and as well as outside the community,” said the victim in the 2005 crime.

His lawyer, Craig Hubert, was also in court and said afterward that the victim and his family feel that “justice was served.”

He said his client “will continue to be guided by his family, friends and community through therapy and treatment for the emotional traumatic harm that he continues to live with on a daily basis.”

Chinn, a native of Israel, finished high school, and had been a teacher at the school and involved in the National Council of Synagogue Youth. Though commonly referred to as a rabbi, he is not ordained.

Technically, the statute of limitations had run out for a charge of endangering the welfare of a child, in the case stemming from 2005. As a result, Chinn had to agree to waive that limitation.