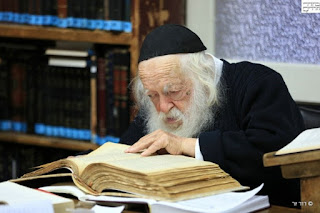 I was deeply distressed to discover recently that someone that I used to know is suffering from a very serious illness. It was further told to me that the person has to make a choice between two radically different courses of action to deal with this illness. It's a very difficult decision to make, with significant pros and cons on each side. So the person has decided to ask Rav Chaim Kanievsky.

Rav Chaim Kanievsky is 89 years old. He has spent virtually his whole life insulated from the outside world. He is a selfless person who has dedicated his entire life to the study of Torah (apart from a very brief period during the War of Independence when he served on guard duty). Many people, following the contemporary charedi notion of Daas Torah (in which the less a person knows about the world, the purer is his wisdom), believe that this makes him uniquely suited to give guidance.

But it goes even further. People consider even a word of blessing from him to be guidance. Consider the following story from Mishpacha magazine, about one of the many people who go to Rav Chaim for his guidance (note for those thinking of doing this: his trusted aides are people who will give you preferential treatment if you give them money):


Guessing by the radiant smile on the man who emerged from behind the white wooden door, one might think that he had just won the lottery in the tiny apartment. Moments before (emphasis added - N.S.), he stood at the head of the line, conversing on the cell phone — probably with a worried wife — about every minute and a half. Posture bent, overwhelmed by the pressing concerns he did not share with fellow visitors, he conducted simulations, finalizing a presentation of the question, and promised his family — bli neder, of course — that he would present all of the arguments, both for and against, and that he would remember to mention Shoshke bas Mindel, desperately in need of a shidduch.

Upon emerging from the inner sanctum, he wears the look of a man relieved of a heavy load. “We have a yeshivah!” he hisses into the phone. The crowded conditions in the corridor, and the brotherly atmosphere that characterizes the local citizenry, turn his whispered words into public fodder.

“What did Rav Chaim say?” someone asks.

The man reveals the question that brought him there: They weren’t sure which yeshivah their Yossi should attend the following year. “Nu, and what did Rav Chaim say?”
“He said, ‘Brachah v’hatzlachah.’ Now we’re sure: Yossi will attend the yeshivah where he already took a bechinah (exam).”


In this story, Rav Chaim did nothing at all other than offer two words of blessing. Yet the questioner read into that as being a weigh-up decision as to which yeshivah his son should attend! And the magazine printed this story as an example of Rav Chaim's wisdom!

Last week there was another example of this, and it's on video for everyone to see. Someone went to Rav Chaim and told him that there is a deadly storm headed for Miami, of a kind that has killed many people. They asked: Should people flee? And he replied: Sakanah! ("There's a danger!"). And that was the end of the conversation. ( How come he had to be told that Miami was in America? PM)

This brief interaction is viewed very differently by different people. Some people genuinely see it as a demonstration of Divine Daas Torah. "Rav Chaim Kanievsky has ordered people to evacuate Miami!" Others see it as a tragic example of nothingness. He was told that there is a life-threatening danger, so he said that it's dangerous. You can get the same answer from a five-year-old.

Is there any way to prove to people that Rav Chaim's answers are not worth what these people think they are worth? Actually, there is. Or at least, there ought to be; the following two instances should prove it to anyone with a modicum of intellectual honesty.

One was the well-publicized case of Rav Chaim pronouncing a berachah, with Shem u'Malchus, on a king. Except that the person was not a king at all, and was simply a fraudster. Anyone with critical thinking skills (or access to Google) could have figured that out in less than a minute.

The second, and much more serious, instance was when Rav Chaim signed a letter attesting to the righteousness of Elior Chen - the worst child abuser in the history of Israel. Perhaps even more disturbingly, when a neighbor of mine asked him why he signed such a letter, Rav Chaim absolved himself of all responsibility and authority, saying that he signed because his rabbonim signed.

I am sure that Rav Chaim's blessings can be a wonderful placebo for many people and are psychologically reassuring for them. But it's a tragedy that people see him as providing meaningful guidance on important life decisions.
http://www.rationalistjudaism.com/2017/09/divine-daas-torah-or-worthless-words.html?spref=fb
Posted by Paul Mendlowitz at Monday, September 18, 2017 4 comments: