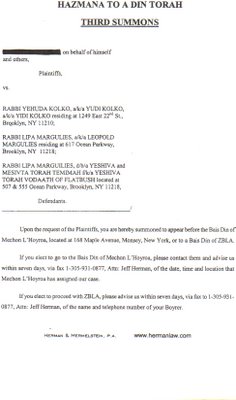 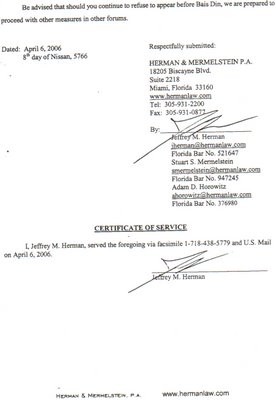 To All Jewish People Of Goodwill Around The World:

The final communications with two of the most evil Jews alive today are over. The UOJ team wanted to follow Jewish law by having our grievances heard in bais din.

Lipa Margulies and Yudi Kolko have not responded.

I do not need to spell out what our next step will be.

This is the beginning of the end of Yeshivah Torah Temimah...my advice to members of the staff and to the parents of the students is to look for another place for yourselves and your children.

Rabbis Schustal and Greenfeld, there is a group of wealthy baalei-batim that are willing to back you in opening up a new yeshiva. Ultimately, you need to consider your own future and the future of hundreds of talmidim that will follow you wherever you go. It will take some time; there will be no more Torah Temimah as it exists today. You are welcome to contact me for more details.

Please watch this blog for the latest developments "after" they happen...I do not intend to give notice to the rishaim prior to the next set of events.

PROOF THAT THE ASHER YATZER GEDOLIM
ARE JUST THAT:

1-FULL PAGE AD IN THE YATED AGAINST PRE-PACKAGED ROMAINE LETTUCE SIGNED BY 60 MORONS WHO HATE HEINNEMAN.

2-AD IN THE HAMODIA, SIGNED BY THE NURSING HOME BRIGADE, AGAINST "THE MAKING OF A GADOL"(DUMBEST BOOK EVER WRITTEN, BY THE DUMBEST PUTZ EVER BORN-UOJ)

3-PAGE TWO AD IN THE YATED INVITING THE "OILAM" TO SHIMSHI SHERER'S DRASHA ON HOW TO MARRY RICH. SEPARATE ADVICE FOR MEN AND WOMEN.(SPONSORED BY THE MOSHE SHERER "JEWISH GROOMING" FOUNDATION.)

4-FULL PAGE AD IN THE JEWISH PRESS ON THE AGUDAH'S UPCOMING DINNER; ONE OF THE HONOREES BEING WJC'S SWINDLER OF THE YEAR, AND PROUD CHAVRUSA IN LEARNING TORAH WITH CARDINAL LUSTIGER AND OTHER CATHOLIC CHURCH MEMBERS, RABBI DOCTOR ISRAEL(BRONFMAN'S WATER BOY) SINGER!

NOT A WORD ABOUT THE REFUSAL OF GANGSTER MARGULIES AND PEDOPHILE KOLKO'S REFUSAL TO COME TO BAIS DIN:

Officials in the district attorney's office stressed that they would wait to decide on bail until they received a psychiatric evaluation on Valis.

One of the rabbis, speaking to Israel Radio, said that the basis for the decree was that Valis' wife was still supporting him, and that if he had indeed killed his son, she would not be at his side still.

Valis is facing manslaughter charges for beating his baby son to death. He allegedly hurled the boy against the wall after the infant started to cry, and is suspected of repeatedly biting, beating, pinching and punching the infant since his birth. Valis reportedly "did not accept him" due to a defect in the child's neck muscles, police said.

Extremist elements in the haredi community had previously threatened to riot and to "make Jerusalem burn" if the alleged killer is not released from custody, even though police said that he has admitted beating his child.

In a previous effort to ease tensions, rabbinical sages and Valis' family issued a statement two weeks ago calling on protesters to refrain from violence and from burning trash on the street.

Sent in by Archie Bunker
Posted by Paul Mendlowitz at Tuesday, August 26, 2008 403 comments: