Beware Of The Glib Frauds! 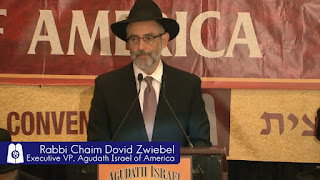 Excerpts of The Forward's interviews with David Zwiebel and Marvin Schick...

....“Until not terribly long ago, the issue was very much in the shadows,” said David Zwiebel, director of government affairs and general counsel of Agudath Israel of America. “The fact that there were isolated reports here and there of cases arising in yeshiva settings, it was known, but they were very isolated.”

“Sometimes they were dealt with correctly and sometimes incorrectly,” Zwiebel added, “but the severity of the problem and the possible magnitude were really things that most people, including myself, just didn’t understand.”

Marvin Schick, who has written extensively about Jewish affairs in his position as president of four Orthodox Jewish day schools, one of which is ultra-Orthodox, believes that Orthodox Jews at large are following the trends of larger society. Because there is greater attention being paid to this problem in the secular world, the Orthodox community is just following suit, he said.

Asked whether more people are now realizing that sexual abuse is a real problem, Schick said: “I don’t think [that’s] fair. I’ve been president of four schools for 36 years, and there hasn’t been a single situation.”

He also warned against the possibility of false accusations, which could ruin the lives of those unjustly punished.

From the distance, Zweibel and Schick seem like ordinary Homo sapiens. I do not believe that they run around naked at night in the streets of New York - or go dumpster-hopping for their lunch --- or urinate on fire hydrants... (I could be wrong on this last one.)

What did Zwiebel and the Agudath Israel do about the cases they were aware of? The cases that were handled improperly, did they intervene to right a horrible wrong? Did they apologize to Robert Kolker of New York Magazine for outright slander and character assassination? Will they publicly address the child-rape problem at this year's Agudah convention? Will they work with rabbis and lawmakers feverishly - to implement laws that will always put our childrens' safety first? Are they publicly going to admonish and even expel rabbis from their organization that knew and facilitated the child-rapist epidemic by covering-up for child-rapists?

Teach us O' wise ones! How were the cases that you claim were handled "correctly" --- tended to? Share with us O' great ones from 42 Broadway! How many cases were handled correctly? Where are the perpetrators? Are they still around kids? Are they being monitored by anyone? The last time I checked - the former rabbi employee of Torah Umesorah, who spent five years in jail for Internet predatory crimes against children - was up to his old tricks! Your Gedolim - what sayeth them? We want answers...! Your version of "trust daas Torah" is gone forever for the too few thinking Jews among us! We don't, and will  never trust you - we despise you for the churban that flamed under your tenure!

The human condition means nothing to you loathesome frauds. Your values are all tied to symbols, meaningless rituals and manufactured hardships - eccentric posturing; - a herd of moving mouths with no meaningful words.

Will Shmuel Kaminetzky publicly apologize for sending Moshe Eisemann from Philadelphia to Baltimore's Ner Israel some forty years ago - after numerous complaints from students that Eisemann, allegedly, not only fondled them, but actually "penetrated" them and had oral sex with students? Will he apologize along with his son in-law Tzvi Berkowitz of Ner Israel, for the child-rape of God knows how many students in Ner Israel over that forty year period?

Will the Agudath Israel expel Eisemann from their sister organization - Vaad L'Hatzolas Nidchei Yisroel - that sends Eisemann around the globe - promoting "Torah values" to unsuspecting teens? Will they follow the lead of the Yeshiva of Berlin, Germany ---- that terminated Eisemann " without government intervention" - knowing that a "shmua or verified rumor" is enough for them to keep Eisemann away from kids?

Let me get to Mr.RJJ - Marvin Schick - the lawyer putz who is in love with himself. You're a pathetic shyster excuse of a human being. This is not the time to play word games! There's a huge difference between not being aware of child-rape incidents and "never having any incidents."

Hey Marv, - by now you know that 95% of child-rape victims never come forward, and I'll take an educated guess - backed up by hard data, that in the Orthodox Jewish community, that number rises to greater than 99%!

Both of you - Schick and Zwiebel - had an opportunity - erev Yom Kippur - to - at the very least - acknowledge the pain of the victims and their families, and promise to "get involved" in addressing this most painful subject. Instead --- more of the same!

I'm deleting from my machzor (prayer book) and my tefillot - "k'rachem av al banim kein t'rachem Hashem aleinu" - I would not want the mercy, that we as a nation, extended to our children - bestowed by God on us!

We've failed our children - we've self-poisoned our genetic bloodline as a nation of baishonim and rachmonim - We have no right to expect God to extend us any kindness, more than we ourselves have extended to our children - His children - the future of the Jewish people.