God is busy throwing rocks??? ---- The rabbi of the main Western Wall plaza called for public “soul searching” after the incident. “This is an unusual and most rare incident that has not occurred for decades,” said Western Wall Rabbi Shmuel Rabinovitch. “The fact that this powerful incident happened a day after the 9th of Av fast, in which we mourned the destruction of our temples, raises doubts and questions which the human soul is too small to contain, and requires soul-searching.” 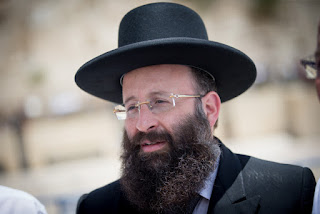 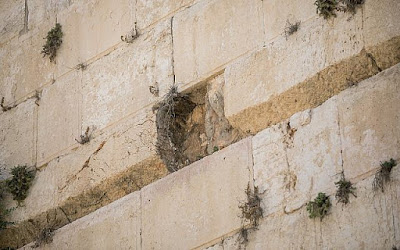 Soul-searching Optional: An archaeologist who visited the site later Monday warned that the entire Western Wall is “danger zone,” and said the public should stay away. Zachi Dvira said he noted multiple cracks in other stones and fears that another stone fall is just a matter of time. Other stones “could immediately fall on the heads of people,” said Dvira, who is completing a PhD on the recorded archaeology of the Temple Mount.

The stone that fell - Sign from God (not) - God is busy throwing rocks???

A stone fell off the Western Wall on Monday morning - but by miracle, no one was injured.

The stone fell into the egalitarian prayer plaza, also known as the "Ezrat Yisrael." It hit the prayer platform a few meters from a woman who happened to be visiting.

The Ezrat Yisrael will continue operating as usual, but the platform where the stone fell will be temporarily closed.

Yizhar Hess, who heads the Conservative movement in Israel, said, "A huge tragedy was prevented this morning. The Western Wall reminded us that it...requires regular inspections by engineers. Professionals are already at the scene."

"The prayer platform, which is next to the Western Wall itself, will be closed until further notice (the Ezrat Yisrael will function as usual)."

Hess also called for an inspection of "the entire Wall" in order "to prevent a huge tragedy in the future."

Unlike the other Western Wall prayer areas, the Ezrat Yisrael stands empty for most of the year, with the exception of occasional bar and bat mitzvah ceremonies. It also sat empty on Tisha B'Av evening, when Jews traditionally fast and mourn the destruction of both Holy Temples.