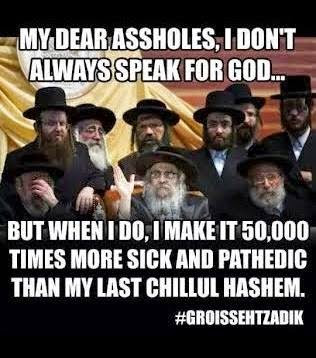 The staunchly anti-Zionist Satmar movement, one of the largest Hassidic movements in the world, has been split for more than a decade between the “Williamsburg Faction”, led by Rabbi Zalman Teitelbaum, and the “Kiryas Joel Faction”, headed by Zalman,’s older brother Rabbi Aharon Teitelbaum.

On Sunday, some 15,000 Satmar Hassidim and other supporters of the movement gathered in Long Island for an event hosted by Rabbi Aharon Teitelbaum and featuring Rabbi Moshe Sternbuch, a senior member of the anti-Zionist Edah Haharedit organization in Israel.

During the keynote address, Rabbi Teitelbaum lashed out at his own followers, charging them with implicitly supporting the State of Israel and Zionism by expressing satisfaction with recent ‘Zionist successes’.

“In recent years, Satmar Hassidim have expressed happiness with the successes of Zionism, Heaven help us,” said Rabbi Teitelbaum, according to Kikar Hashabbat.

“Anyone who joins in celebrating the successes of the Zionists will not merit to celebrate the coming of the Messiah,” he continued, citing a teaching of the first Satmar Rebbe, Rabbi Yoel Teitelbaum.

Rabbi Aharon Teitelbaum also warned of what he claimed was the impending draft en masse of haredi yeshiva students into the IDF, should the Knesset fail to pass a new draft law, replacing amendments to the existing law struck down by the Supreme Court in 2017.

“The terrible decree is hovering over every yeshiva student this September, when the Supreme Court ruling goes into effect, meaning that 50,000 haredi men will be drafted into the IDF.”

“I’m really worried that the [haredi] Knesset members will compromise on this, and if they do compromise on this we’ll be forced once again to team up with other communities to fight against this terrible decree.”