Criminal "Gedolim" Alert! This Is How History Will Judge You!

The famed statue of Joe Paterno was taken down from outside the Pennsylvania State University football stadium Sunday, eliminating a key piece of the iconography surrounding the once-sainted football coach accused of burying child sex abuse allegations against a retired assistant.

Workers lifted the statue off its base and used a forklift to move it into Beaver Stadium as the 100 to 150 students watching chanted, "We are Penn State." 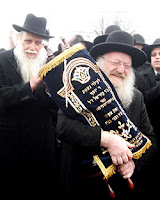 READ IT UNTIL YOU UNDERSTAND THE CRIMINAL RABBIS' MIND:
CLICK: http://rabbimatisyahusalomon.blogspot.com/ 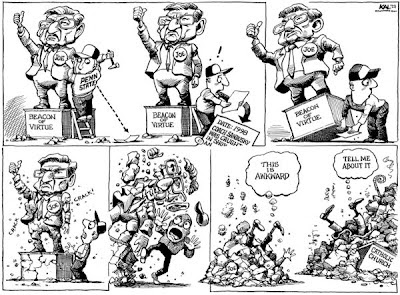 No sympathy for child abusers!

Columnist Susan Reimer and Elizabeth Letourneau seem to have forgotten the harmful role that some mental health practitioners have played — and may continue to play — in the worldwide clergy abuse scandal ("Child sexual abuse needs prevention, not just punishment," July 19).

Many abusive priests were not only weren't reported to the authorities by their bishops but were sent to sympathetic treatment centers that didn't report them either.

Contrary to Ms. Letourneau's assertion that "there is no way for someone to get help for themselves or someone else without involving the criminal justice system," too often mental health practitioners sent abusers back to communities where they could continue to rape children. (THINK OHEL)

Jerry Sandusky In some cases, even when bishops were advised not to allow child-molesting priests to be involved with children again, there was no oversight to prevent it from happening.

St. Luke's in Maryland sent a notorious priest, Father Geoghan, back to Boston and failed to report to authorities that the archdiocese had not followed its recommendations about this dangerous predator. Unfortunately for children, the result was predictable.

A treatment philosophy where everyone keeps the offender's secret is antithetical to the protection and safety of children. Secrecy is the lifeblood of child sexual abuse and assault.

Treatment professionals without the ability to monitor and control abusers should not ask society for the right to make unilateral decisions about the disposition of child molesters. The cloak of medical confidentiality enables the offender in the denial and minimization of his behavior; it affirms the secrecy that allowed the offenses to be committed in the first place.

A well-known national expert, Lucy Berliner, has noted that reporting child sexual abuse may be difficult and uncomfortable and may even lead to loss of income. However, it is also an opportunity for therapist and other professionals to model responsible community values and law abiding behavior.

Sadly, most child molesters get probation or other sentences where the punishment doesn't come close to fitting the crime. Sentencing guidelines in Maryland are very favorable to convicted sex offenders.

That is why Ms. Letourneau's suggestion that Maryland's criminal background check law be repealed is outrageous. That law has protected many vulnerable children by deterring sex offenders who pose a danger to them, as well as actually identifying dangerous individuals who otherwise would have gained access to children had the law not been in effect.

Penn State University officials did not report assistant coach Jerry Sandusky to the authorities because in their view it would have been "inhumane." It's time to think first about the rights of the victims, not the protection of powerful institutions that turn a blind eye to the perpetrators of these horrible crimes.