RABBIS - SHMUEL KAMINETZKY, MALKIEL KOTLER, ARON SCHECHTER, MATTISYAHU SALOMON...YOU ARE ON NOTICE! CAUSE HARM TO A CHILD OR A COMMUNITY...I WILL COME AFTER YOU UNTIL I SEE YOU BEHIND BARS! 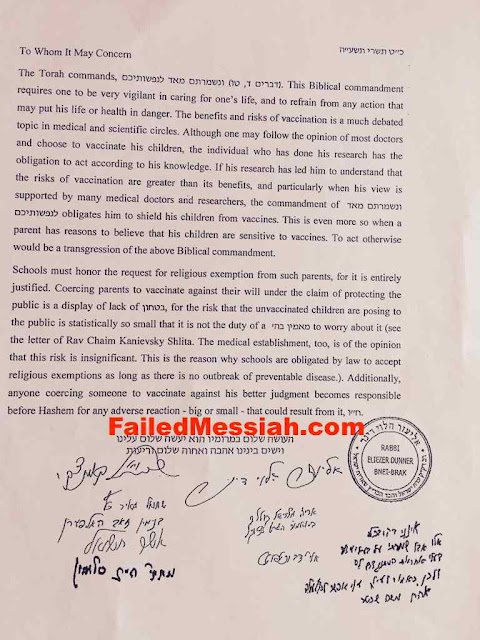 I have written much, and for more than a decade about the blatant ignorance & evil of Jewish clergy on a host of social topics that negatively affect our families, destroy children, and create dire poverty with limiting or eliminating secular education and with their kollel businesses that impoverish generations....

These same evil people, yes very evil, who have covered up child sex abuse in every disgusting, unimaginable ways; Kaminetzky, Salomon, Kotler, Aron Schechter - dare to challenge the vast majority of doctors, scientists, and mountains of evidence and statistics about the importance of vaccinating your children from deadly infectious and communicable diseases. THEY ARE CHARLATANS BEYOND IMAGINATION AND ARE A DANGER TO SOCIETY AT LARGE!

Yet, nothing is 100% foolproof and can be compatible with every individual's genetic composition. Therefore you have doctors who have devoted their lives to the prevention and curing of diseases.

If your doctor tells you NOT to vaccinate your child, get a second opinion, as most intelligent people do with major medical decisions.

BUT TO LISTEN TO THESE RABBIS ABOUT ANYTHING TO DO WITH SCIENCE/MEDICINE THAT CAN CAUSE SERIOUS ILLNESS & DEATH TO YOUR CHILD AND COMMUNITY --- IS A CRIMINAL ACT THAT IS UNCONSCIONABLE!

If you received advice from a rabbi NOT to vaccinate your child or force schools to admit children that were not vaccinated, in many states and jurisdictions that is now ILLEGAL!

BRING IT TO MY ATTENTION - I WILL CONTACT THE LOCAL AUTHORITIES!

Orthodox Jewish parents, like responsible parents across the United States, overwhelmingly vaccinate their children against measles, mumps, rubella, polio and the other childhood diseases for which inoculations are now almost miraculously commonplace.

As in many communities, a small minority of parents chooses not to do so. The ongoing measles outbreak demonstrates how this could bear very serious consequences, not only for their own children but others’ too, especially those medically unable to be vaccinated.

The Orthodox Union (OU) and the Rabbinical Council of America (RCA) strongly urge all parents to vaccinate their healthy children on the timetable recommended by their pediatrician.

Parents who choose to not vaccinate often cite a medical study that purported to link autism and the MMR vaccine. The study was discovered to be fraudulent and was withdrawn; its lead author was found to have acted "dishonestly and irresponsibly," and his license to practice medicine in Britain was revoked.

Judaism places the highest value on preserving human life. It is well known that those facing even a potential life or death situation are instructed to set aside the Sabbath and other key tenets of halachic (Jewish law) observance until the emergency has passed.

Prayers for good health and for the complete and perfect healing of the ill are an ages-old aspect of Jewish tradition. But prayers must go hand-in-hand with availing oneself of medical science, including vaccination.

There are halachic obligations to care for one’s own health as well as to take measures to prevent harm and illness to others, and Jewish law defers to the consensus of medical experts in determining and prescribing appropriate medical responses to illness and prevention.

Therefore, the consensus of major poskim (halachic decisors) supports the vaccination of children to protect them from disease, to eradicate illness from the larger community through so-called herd immunity, and thus to protect others who may be vulnerable.

The vaccination of children who can medically be vaccinated is absolutely the only responsible course of action. *


"Beyond these arguments is our refusal to allow people to elect out of other crucial aspects of public health law on the basis of religion. You cannot object to a drunken-driving arrest, for instance, on the grounds that you worship Bacchus and feel encouraged to have six shots of bourbon before getting in a Chevy. You cannot refuse to wear seatbelts because your spiritual beliefs reject confinement.

In a well-argued essay, “Vaccination in Halakhah and in Practice in the Orthodox Community,” published in Hakirah, The Flatbush Journal of Jewish Law and Thought, Asher Bush, a rabbi, made the implicit point that on the subject of vaccines we are in some sense regressing. He pointed to the case of an Orthodox Jew who was arrested in 1896 in London for refusing to vaccinate his child on the grounds that his religion forbade him. The prosecutor in the case, who was also Jewish, sought guidance from the chief rabbi of Britain. The rabbi’s conclusion, essentially, was that the man’s contention was hogwash."
Posted by Paul Mendlowitz at Sunday, August 30, 2015