One of Mayor Bill de Blasio’s leading supporters in New York’s Orthodox Jewish community surrendered in Manhattan Criminal Court on Thursday to begin a 15-day sentence for misdemeanor sexual abuse, after an appeals court rejected his request for a new trial, the district attorney’s office said.

One of Mayor Bill de Blasio’s leading supporters in New York’s Orthodox Jewish community surrendered in Manhattan Criminal Court on Thursday to begin a 15-day sentence for misdemeanor sexual abuse, after an appeals court rejected his request for a new trial, the district attorney’s office said.

The supporter, Ari Noe, 42, of Borough Park, Brooklyn, was sentenced nearly three years ago after being convicted of forcibly touching a woman in an Upper West Side bar, but the execution of his sentence had been delayed repeatedly while he appealed the verdict.

Mr. Noe went to court on Thursday expecting another delay, but in a surprise move, a prosecutor handed him a decision from the appeals court denying his motion for a new trial.

Mr. Noe’s lawyer, Abe George, asked the court for more time to allow his client to get his affairs in order. But Judge Melissa A. Crane said Mr. Noe had exhausted his appeals and ordered court officers to take him into custody right away.

Mr. George said he was surprised by “the callousness of both the D.A. and the judge not to allow Mr. Noe time to settle his affairs and have a proper goodbye with his wife and six children.”

Mr. de Blasio has distanced himself from Mr. Noe, the chief executive of an outdoor advertising company and a backer of the mayor’s 2013 campaign, since Mr. Noe’s conviction came to light this year. 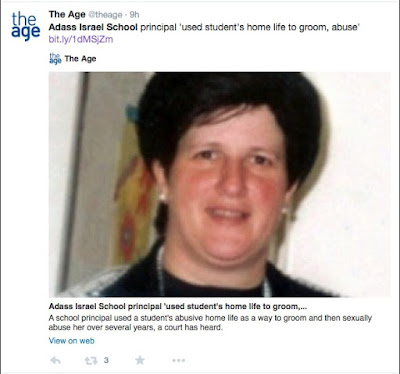 The woman is the sister of ­another victim who was last year awarded $1.27 million for molestation at the hands of Ms Leifer while she was principal of the ultra-orthodox Adass Israel school at Elsternwick in Melbourne’s inner southeast.

The Melbourne woman, who cannot be named, has followed her sister in suing Ms Leifer in Victoria’s Supreme Court, alleging years of abuse by the former headmistress while a student and then teacher at the school.

Students at the female-only Adass Israel school are brought up in ultra-orthodox Jewish families and have limited access to members of the opposite sex, no television, radio, internet, magazines or newspapers, and have no sexual education. Ms Leifer fled Australia for ­Israel in 2008 in the middle of the night within hours of being made aware of allegations she had sexually abused more than eight girls at the school. Some members of the Adass Israel school board are under investigation by Victoria Police for helping Ms Leifer and her family leave to avoid a criminal investigation and possible prosecution.

Ms Leifer has been under house arrest in the ultra-orthodox enclave of Bnei Brak in ­central Israel since 2014 after ­Israeli authorities responded to an extra­dition request by ­Canberra. Australia wants her to face 74 criminal charges for sexual abuse of children while head of the school, but the mother of eight has avoided extradition, claiming psychiatric distress.

Family, friends of victims and sexual abuse advocates have ­accused her of manipulating the Israeli justice system to avoid ­facing the charges.

Last month, an Israeli judge ­rejected her plea to drop the ­extradition case after her lawyers argued she was medically unfit to travel to Australia due to ­depression and panic attacks. It was the seventh extradition court hearing for Ms ­Leifer, leading to prosecutors ­accusing her of stalling tactics. State prosecutor Avital Ribner-Oron told the Jerusalem District Court that Ms Leifer was “faking” her illness to have the proceedings dropped.

The judge refused to drop the extradition application, but ordered an intensive psychiatric assessment of Ms Leifer.