Trouble in the Catskills 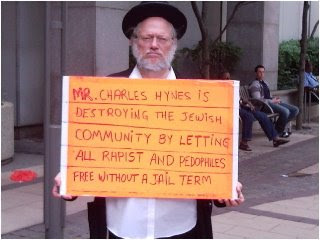 In the Catskills this summer, worries about children’s safety are extending beyond the swimming pool.

Yehuda Kolko, the rebbe who pleaded guilty to two counts of child endangerment and who is suspected of abusing dozens of children in his teaching career, moved into a summer home at a development in South Fallsburg, N.Y., on June 12. Pines Estates, where he is renting, is a popular summer destination for Orthodox families and is also inhabited year-round by families connected to the well-known Yeshiva of South Fallsburg, nearby.

On Kolko’s first Friday night there, a summer resident aware of Kolko’s history confronted him in the shul during Maariv and told him to leave the neighborhood quietly, a witness said. When Kolko refused, the man interrupted the tefilah to announce from the bima that Kolko was a child molester and posed a danger to children. When congregants protested, the man at the bima, a student of Rav Dovid Feinstein, replied with multiple Halachic sources to support his action, one of which was Masechet Chullin 8a, which discusses the need to be strict when it comes to matters of danger.

The next day, Shabbat morning, at the Yeshiva of South Fallsburg nearby, the same witness said Kolko was welcomed and called to the Torah for an Aliyah.

Daniel Sosnowik, a resident of Pines Estates who has an eight-year-old son, was shocked. Sosnowik is a captain in the New York City Police Department.

When Sosnowik spoke to the gabbai of the yeshiva minyan he was told that Rabbi Tzvi Abba Gorelick, the dean and owner of Yeshiva of South Fallsburg, had declared Kolko to be “kosher.” That night, residents of Pines Estates visited Kolko and apologized for their neighbor’s actions the previous night. When Sosnowik met with Rabbi Gorelick to express his concerns Rabbi Gorelick maintained that the yeshiva must be “neutral” regarding Kolko, Sosnowik recalled. He quoted Rabbi Gorelick as saying that the issue was complicated by the “stigma” associated with child abuse.

One of Kolko’s sons attended Yeshiva of South Fallsburg, Sosnowik said he was told.

“Am I the only one crazy here?” Sosnowik asked, “How could parents do this? How could yeshiva leaders do this?”

“We just said we can’t throw him out; nobody knows him!” he exclaimed. “I don’t even know him! I met him for the first time!

People are making these assumptions [about the yeshiva's dealings with Kolko], they are making up things. I heard years ago about him [Kolko]. Some people say yes, people say no…”

Asked if he felt Kolko was a threat to children, Rabbi Wachtfogel replied, “I don’t know.”

“You can ask Binyamin Hirsch,” Rabbi Wachtfogel said, then hung up.

He was apparently referring to Ben Hirsch, president of Survivors for Justice, an organization that advocates for and assists victims of child and sexual abuse in the Orthodox community.

Chaim Bloom, who attends the Yeshiva of South Fallsburg Kollel and lives in Pines Estates said that he wasn’t comfortable with Kolko being around.

“I try to keep away from these things. To be honest, that’s why I live in South Fallsburg and not Lakewood,” he explained. “I didn’t welcome him. I’d never welcome a child molester.”

“I think people are paranoid or afraid of him because of the label he’s been given, which has never been proven in a court of law,” said Jeffrey Schwartz, the attorney who defended Kolko against three criminal charges. “That has nothing to do with any sex-related offense. He was not registered as a sex offender. He never did admit to any sexually inappropriate conduct to any child.”

Schwartz added that he believed that Kolko posed no danger and was “just a sick old man, and should be left alone.” He would let Kolko be with his own kids, he claimed.

Before moving to Pines Estates, Kolko lived in the summer-home community of Mesorah Woods in Woodridge, NY. On July 5, a community activist, Rabbi Levi Goldenberg, said he was asked by a concerned parent to help get Kolko out of the community. He described the parent as “very anxious.”

“They seemed afraid of the guy,” he said. “The women were very concerned, watching their kids and not allowing them out of their sight.”

Goldenberg said there were no legal means to force Kolko out of Mesorah Woods, since Kolko’s plea deal with the Brooklyn District Attorney’s office did not require him to register under Megan’s Law, the registry of convicted predators.

“Maybe he did teshuva,” one resident told Goldenberg, “but let him do teshuva somewhere else.” Kolko was persuaded to leave Mesorah Woods and moved to the Pines Estates on July 12th.

Sosnowik, the NYPD captain, was disheartened by the entire episode.

“Kolko pleaded guilty to child abuse charges. He didn’t have to. He is guilty. If it’s good enough for the criminal justice system it should be good enough for us.”
Online Surveys & Market Research
Posted by Paul Mendlowitz at Wednesday, July 29, 2009 44 comments: