Outrage as Eliezer Berland, who served time for indecent acts and assault, including of minor, set to light bonfire in Meron 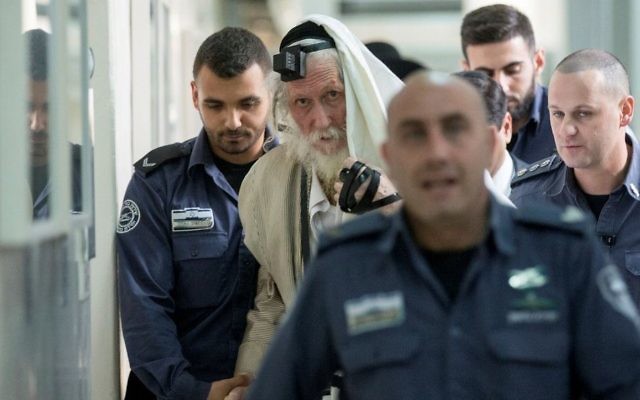 Rabbi Eliezer Berland covers himself with his talit (prayer shawl) at the Jerusalem Magistrate's Court during his trial for sexual assault charges on November 17, 2016.

A rabbi convicted of sex offenses, including against a minor, is set to be honored at the annual Lag B’Omer festival at a pilgrimage site in northern Israel on Wednesday night, sparking an outcry.

Eliezer Berland, 80, who served five months of an 18-month prison sentence after eluding arrest for three years, will be among the 20 rabbis who will light a bonfire at the tomb of Rabbi Shimon Bar Yohai in Meron, where hundreds of thousands of worshipers were expected to gather Wednesday evening and Thursday.

The Religious Affairs Ministry, which contributes some NIS 15 million ($4 million) in funding to the Meron ceremonies, condemned Berland’s participation, but insisted it was powerless to stop him as the annual festival fell under police purview.

Police, in a statement, disputed the ministry’s account, saying they were responsible only for securing the event. The Israel Police “doesn’t determine the identities of the participants and lighters, since [Berland’s inclusion] does not constitute a violation of the laws of the State of Israel, and therefore the claim regarding the police is out of place and wholly unclear,” it said.

One of Berland’s victims, identified only as Adele, told the Walla news website the decision to include the rabbi in the religious ceremony was a “disgrace,” and demanded the ministry and police block him from participating.

“It’s a disgrace that a convicted sex offender and an obsessive womanizer dares appear on the stage of honor at the grave of the man who, above all, symbolizes in the Jewish tradition the sanctity of modesty. Is there no limit to the absurdity?” she was quoted as saying.

The Beit Hillel rabbinical group called on Israel’s chief rabbis, as well as all Israeli rabbis, to join together “in a call to prevent the great desecration of God’s name of a public lighting at Rashbi’s [Rabbi Shimon Bar Yochai’s] grave by convict Eliezer Berland.” 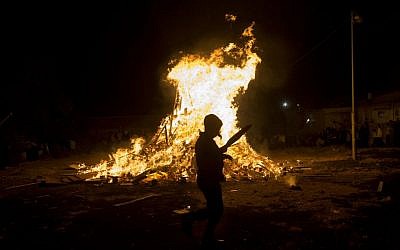 Ultra-Orthodox Jews seen near a big bonfire, during celebrations of the Jewish holiday of Lag B’Omer

Berland was sentenced to 18 months in prison in November 2016 after being convicted of two counts of indecent acts and one case of assault, as part of a plea deal. He was freed after five months, in part due to ill-health.

Long considered a cult-like leader to thousands of his followers from the Bratslav sect, Berland fled Israel in 2013 amid allegations that he had molested two female followers, one of them a minor.

According to the indictment, Berland would often receive people in his homes in Jerusalem and its suburb Beitar Illit and hold private meetings intended for spiritual guidance, counseling or benedictions. The rabbi would sometimes take advantage of the meetings and of his position in the community to engage in sexual acts with women, including minors, according to the charges against him.

He was on the run from authorities until 2016, avoiding several Israeli attempts to extradite him. He moved between Zimbabwe, Switzerland, the Netherlands and South Africa, accompanied by a group of devout followers numbering around 40 families. Berland was apprehended by South African authorities, extradited to Israel, and detained upon his arrival at Ben Gurion Airport in July 2016.

Lag B’Omer is a key holiday in the Jewish mystical tradition. It is said to be the day, in the 2nd century CE, of the death of Bar Yohai’s, and also the day when he first conveyed the text of the seminal Jewish mystical work, the Zohar.

Literally meaning the “33rd of the Omer,” Lag B’Omer is a day during the seven weeks between the holidays of Passover and Shavuot that is not considered a day of mourning for the students of Rabbi Akiva, Bar Yohai’s teacher, who tradition says perished in a plague during those weeks. The period before and after Lag B’Omer is thus traditionally a time when public celebrations are eschewed.
Hundreds of thousands of Jewish Israelis flock to Bar Yohai’s tomb, the second-most visited holy site after the Western Wall, on Lag B’Omer each year.