Freundel, an Orthodox rabbi, is next due in court for a hearing on Feb. 19. 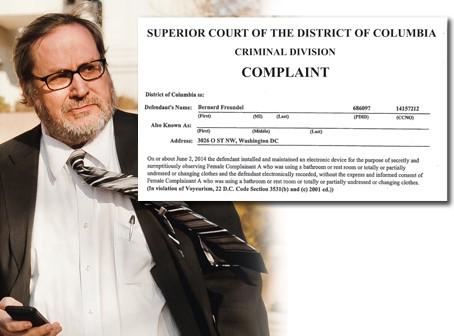 Embattled Georgetown Rabbi Barry Freundel appears at his mostrecent court hearing; the criminal complaint.Photo by David Stuck
Prosecutors may move forward with dozens more counts of voyeurism against Rabbi Barry Freundel, now that they have identified 152 victims, according to sources who attended a closed-door meeting between the prosecution and victims.
Only 88 of those victims can be included in the criminal case against Freundel, as 64 of the women were videotaped as far back as 2009, placing them outside the statute of limitations, prosecutors from U.S. Attorney’s Office in the District of Columbia told the women,according to several sources.
Currently, Freundel is charged with six counts of misdemeanor voyeurism. If convicted, he could be sentenced to up to one year of incarceration on each count.
According to four women who attended the Feb. 11 meeting, prosecutors said they would prefer to reach a plea deal in the case rather than go to trial, as any trial would inevitably mean the women would be subjected to cross examination by Freundel’s lawyers and would have to identify themselves on footage taken in The National Capital Mikvah.
The charges stem from allegations that the rabbi used cameras to record women at the ritual bath.However, prosecutors stressed that any plea offer conveyed to Freundel would include jail time, the women said.
Most of the 35 women attending the meeting “were really just curious,” said Kate Bailey, who has been informed that she was videotaped by Freundel. (Her case was outside the statute of limitations.) A few of the attendees were angry, others depressed, but most were just there to get answers, she said.
During the meetings, the women were given paper to list any questions they had, their feelings and what their thoughts were on a plea bargain.
If a plea deal cannot be reached in this case, the matter will proceed to trial.Freundel, an Orthodox rabbi, is next due in court for a hearing on Feb. 19. He has pleaded not guilty.
http://washingtonjewishweek.com/19742/152-victims-ided-in-freundel-case/
Posted by Paul Mendlowitz at Wednesday, February 18, 2015

"Do we have faith in our religious leadership on this matter? If the answer is no, a restructure is in order."

Op-ed: rabbinic failures go deeper than a lapse in judgment - THERE SHOULD BE HELL TO PAY!