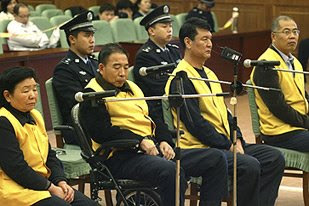 Two men have been sentenced to death by a Chinese court after being convicted of playing a key role in a tainted milk scandal that led to six children dying and 300,000 falling ill.

The two men facing execution include Zhang Yujun, who was convicted of making and selling more than 600 tonnes of "protein powder" laced with melamine, the industrial chemical responsible for the health crisis.

He was found guilty of endangering public safety. The second convict was not named by court officials on Thursday.

The former boss of bankrupt dairy giant Sanlu, one of the main firms at the centre of last year's scandal, was jailed for life in a series of verdicts handed down by a court in Shijiazhuang, the capital of the central Hebei province.

Tian Wenhua was convicted of producing and selling fake or substandard products, charges to which she had pleaded guilty.

Melamine is a toxic industrial chemical normally used in plastics and fertilisers.

Nearly 10 per cent of milk samples from China's top three dairies were found to be tainted with melamine.

The contamination was blamed for the deaths of six infants and for making some 300,000 more ill.

Products from more than 22 Chinese companies were affected, with recalls issued across China and for Chinese-made products around the world.

The convictions follow the trial of 21 suspects accused of involvement in the scandal.

Three other former Sanlu executives were given sentences of between five and 15 years, while another man, Zhang Yanzhang, was given a life sentence, also for endangering public safety.

Tian, 66, pleaded guilty late last month to charges of producing and selling "fake or substandard" products after infant formula was found to be contaminated with the toxic chemical.

She had admitted that she knew of problems with her company's products for months before informing authorities. The scandal was exposed in September.

State media reported that Tian could face the death penalty, but her lawyer Liu Xinwei was quoted earlier this week in the Beijing News as saying that capital punishment was not applicable in the case.

"According to the criminal law, there is no capital punishment for the crime of manufacturing and selling fake or substandard products," Liu said.

"Therefore, the most severe penalty for her would be life imprisonment."

Aside from the four former Sanlu executives, 17 others had faced prosecution, charged with producing, adding or selling melamine-tainted milk to dairy companies, the official Xinhua News Agency said.
Posted by Paul Mendlowitz at Thursday, January 22, 2009 24 comments: