Lessons From Libya - A Tale Of 2 Hats! 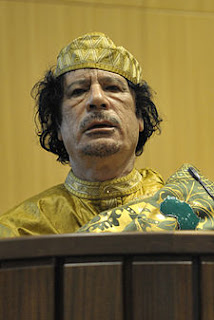 "Kadafi's biggest mistake was that he built his whole regime on pure fear," said Omar Amer, a member of the Libyan Youth Movement, a protest group that spreads its message through Facebook. "He totally abandoned civilizing Libya. He neglected education and development projects. He left the majority of his people in the dark ages and built his might on fear through torturing and killing political dissidents in public.

"But the fear that Kadafi built his empire with is gone, and that was his last shelter," Amer added. 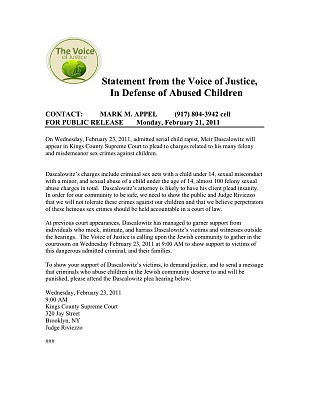 On Wednesday, February 23, 2011, admitted serial child rapist, Meir Dascalowitz will appear in Kings County Supreme Court to plead to charges related to his many felony and misdemeanor sex crimes against children. 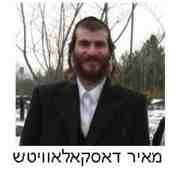 Dascalowitz’s charges include criminal sex acts with a child under 14, sexual misconduct with a minor, and sexual abuse of a child under the age of 14, almost 100 felony sexual abuse charges in total. Dascalowitz’s attorney is likely to have his client plead insanity. In order for our community to be safe, we need to show the public and Judge Riviezzo that we will not tolerate these crimes against our children and that we believe perpetrators of these heinous sex crimes should be held accountable in a court of law.

At previous court appearances, Dascalowitz has managed to garner support from individuals who mock, intimate, and harrass Dascalowitz’s victims and witnesses outside the hearings. The Voice of Justice is calling upon the Jewish community to gather in the courtroom on Wednesday February 23, 2011 at 9:00 AM to show support to victims of this dangerous admitted criminal, and their families.

To show your support of Dascalowitz’s victims, to demand justice, and to send a message that criminals who abuse children in the Jewish community deserve to and will be punished, please attend the Dascalowitz plea hearing below: