How do you wrap yourself in a tallis, bind your tefillin, fooling yourself that your outward show of piety is worth anything, when survivors cannot bear the pain anymore and are killing themselves in unprecedented numbers?

Kinah: From A Survivor Of Child Sexual Abuse The following poem is a contemporary kinah, lamentation, written in commemoration of Tisha b’Av, the fast which commemorates the destruction of the Temple. The quoted Hebrew text comes from Eicha, a text which is read on the night of Tisha b’Av.

How did you let this happen to her? 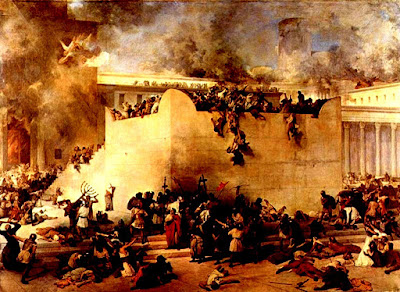 She weeps, yea, she weeps in the night, and her tears are on her cheek; she has no comforter among all her lovers; all her friends have betrayed her; they have become her enemies.

How do you see the pain of an adult still hurt from the pain inflicted upon them as a child, and turn the other cheek ‘because it happened years ago?’

How do you see the pain of a parent begging on behalf of their betrayed child, and say, well, we can’t believe the testimony of a child, and there is no one else who witnessed the act?

How do you teach that we must protect children from technology, from footballs, from images of women, yet you can’t protect from abuse, from rape, from shame, from PTSD?

How do you pray for the third temple, when you cannot acknowledge the evil you perpetuate?

How do you wrap yourself in a tallis, bind your tefillin, fooling yourself that your outward show of piety is worth anything, when survivors cannot bear the pain anymore and are killing themselves in unprecedented numbers?

How do you listen but take no action?

You are a wolf in a sheep’s clothing. You show local authorities, the media, and critics that you care, but survivors know who you really care about.

Like the Sicarii who wanted to maintain absolute control over ancient Jerusalem, you stab and starve your own people of education, help, and justice.

Fair Babylon, you predator, a blessing on him who repays you in kind what you have inflicted on us.
Our community prides itself in being better than others, in being a beacon of family purity and wholesomeness.

Look at what you have done to survivors.

A blessing on him who seizes your babies and dashes them against the rocks!

Every edict that is released about the kashrus of strawberries, when your own kashrus is riddled with child abuse and supporters of abusers....


You sully the pure words of Torah and Prayer with their foul mouths.


Every time you allow a sex offender to take executive positions in a shul or community, to be mesader kidushin, to sit on the dais at a public event, you dash us against the rocks.

Yehudis Fletcher is a survivor and activist. She lives in Manchester, UK, with her family.

Roselle, NJ ·
If you find the churban beis hamikdash too far in the past, too abstract to mourn, and the Holocaust seems to unrelatable to actually cry about, or you're one of those Jews who's sick of hearing about it, maybe consider the fact that children are being sexually abused wholesale in Jewish communities, and nothing meaningful is being done about it.

Reflect on the fact that there are prominent rabbis and community leaders who are actively blocking legislation that would help get the survivors justice, and bring their abusers to justice.


Reflect on the fact that while the charedi world covers up for these crimes, the modern orthodox world enables it by smugly pretending that it's not their problem.

Reflect upon the fact that hundreds of Jews die yearly due to suicide or overdose because of sexual abuse, and that the ones who don't live with PTSD, depression, eating disorders, and self harm, among other things.

I don't want to hear anything about how we all need to get along, about how these issues are divisive and inappropriate for the day. Silence is what perpetuates the problem. Silence and inaction are what's killing victims of child sexual abuse in our community.

If you're looking for a churban to mourn to give today meaning, start there, and consider what you can do to help.
Posted by Paul Mendlowitz at Tuesday, August 01, 2017 No comments: