Mr. President....I know your wife is NOT a hooker, but once and for all why don't you denounce all hookers? Well, not quite... 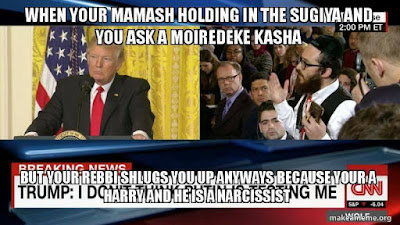 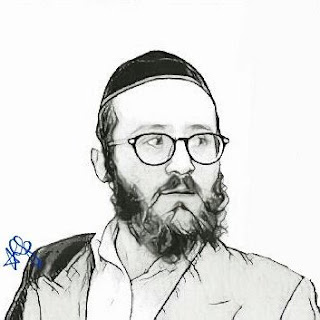 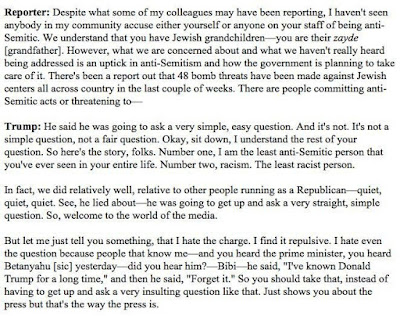 Trump vs. confederacy of hecklers – the press

Beginning with King David and throughout our Literature we’re advised not to sit in the “council of the wicked,” nor to share the same room with a company of scoffers…or else we’re asking for trouble. But that is precisely where an Orthodox Jewish reporter found himself during President Trump’s press conference of a few days ago.

Jake Turx, a respected journalist, asked a simple question that concerns many of us – what’s to be done about the wave of anti-Semitism now sweeping our country most prominently on campus?

Too bad the wording and the timing were all wrong.

By the time Turx got his turn, Trump had already answered 30 hostile questions and was in no mood for one more. Trump, only half listening, took it as another personal attack. All he heard were the words “anti-Semitism” and he bristled. He shrugged off the reporter and told him to “sit down.”

Trump’s accusers would rather not mention that Trump snapped at every reporter during the session.
No one here was at fault, neither Trump nor the reporter whose only mistake was to be sharing the same room with a collection of malcontents.

Turx was different in all the right ways. But for Trump, it’s all the same mob. He can no longer tell journalists apart. Who can blame him for failing to distinguish the good from the bad when each day he gets blasted from all sides? Even Fox News is starting to sound like CNN.

They want his head on a platter and they, the Left, won’t stop with him.

His wife, our First Lady, can’t leave the house without being scorned.

Over here on the Upper East Side a group of uber Progressive Liberal moms won’t let their kids go skating in a specific rink because it’s named for Trump. The same Progressives who preach Sensitivity, Tolerance and Diversity remove their kids from any school that’s attended by any Trump son or grandchild.

No I’m not kidding and neither is Trump who must be wondering if he made the right move at running for president. He had not bargained for this deal.

As for Trump and the press (and this goes for his spokesman Sean Spicer as well) it must be lonely being the only Republican in the room.

The rest of them are all Democrats who snoozed for Obama but have suddenly come awake for Trump. They have no questions. Only accusations.

They are a confederacy of hecklers and I noticed something strange when the camera went wide across the room during last week’s press conference.

There were no adults to be found. These are all kids. A few years ago they were learning their ABC’s from Sesame Street. They’re all 22 years old.

No wonder they know nothing but think they know everything.

So we should not be amazed to find propaganda instead of news and corruption instead of information from this “White House Press Corps.”

The only adult in the room was indeed Jake Turx. He was the only reporter who meant well so naturally they used him to further savage our President.

Do we need to mention The New York Times? Well okay – so here’s what that paper ran on its front pages: “A Jewish reporter got to ask Trump a question. It didn’t go well.” Yes, the Times, all of sudden so concerned for the Jews. Then this, from the Daily Kos: “Trump puts his inner Klansman on full display against Jake Turx.”

Really? Yes. Really. Yes, that’s what it’s like out there in American medialand.

It was never about Jake Turx. It was about the company he keeps, the same company of slanderers that is tainting us all.

New York-based bestselling American novelist Jack Engelhard writes a regular column for Arutz Sheva. New from the novelist: “News Anchor Sweetheart,” a novelist’s version of Fox News and Megyn Kelly. Engelhard is the author of the international bestseller “Indecent Proposal.” For books like his award-winning memoir “Escape from Mount Moriah,” he is the recipient of the Ben Hecht Award for Literary Excellence. Website: www.jackengelhard.com

http://www.israelnationalnews.com/Articles/Article.aspx/20188
Posted by Paul Mendlowitz at Tuesday, February 21, 2017 No comments: