Ultra-Orthodox Shun Their Own for Reporting Child Sexual Abuse! 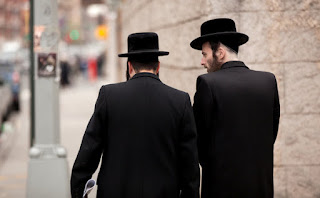 The first shock came when Mordechai Jungreis learned that his mentally disabled teenage son was being molested in a Jewish ritual bathhouse in Brooklyn. The second came after Mr. Jungreis complained, and the man accused of the abuse was arrested.

Old friends started walking stonily past him and his family on the streets of Williamsburg. Their landlord kicked them out of their apartment. Anonymous messages filled their answering machine, cursing Mr. Jungreis for turning in a fellow Jew. And, he said, the mother of a child in a wheelchair confronted Mr. Jungreis’s mother-in-law, saying the same man had molested her son, and she “did not report this crime, so why did your son-in-law have to?”

By cooperating with the police, and speaking out about his son’s abuse, Mr. Jungreis, 38, found himself at the painful forefront of an issue roiling his insular Hasidic community. There have been glimmers of change as a small number of ultra-Orthodox Jews, taking on longstanding religious and cultural norms, have begun to report child sexual abuse accusations against members of their own communities. But those who come forward often encounter intense intimidation from their neighbors and from rabbinical authorities, aimed at pressuring them to drop their cases.

Abuse victims and their families have been expelled from religious schools and synagogues, shunned by fellow ultra-Orthodox Jews and targeted for harassment intended to destroy their businesses. Some victims’ families have been offered money, ostensibly to help pay for therapy for the victims, but also to stop pursuing charges, victims and victims’ advocates said.

“Try living for one day with all the pain I am living with,” Mr. Jungreis, spent and distraught, said recently outside his new apartment on Williamsburg’s outskirts. “Did anybody in the Hasidic community in these two years, in Borough Park, in Flatbush, ever come up and look my son in the eye and tell him a good word? Did anybody take the courage to show him mercy in the street?”

A few blocks away, Pearl Engelman, a 64-year-old great-grandmother, said her community had failed her too. In 2008, her son, Joel, told rabbinical authorities that he had been repeatedly groped as a child by a school official at the United Talmudical Academy in Williamsburg. The school briefly removed the official but denied the accusation. And when Joel turned 23, too old to file charges under the state’s statute of limitations, they returned the man to teaching.

“There is no nice way of saying it,” Mrs. Engelman said. “Our community protects molesters. Other than that, we are wonderful.”

The New York City area is home to an estimated 250,000 ultra-Orthodox Jews — the largest such community outside of Israel, and one that is growing rapidly because of its high birthrate. The community is concentrated in Brooklyn, where many of the ultra-Orthodox are Hasidim, followers of a fervent spiritual movement that began in 18th-century Europe and applies Jewish law to every aspect of life.

Their communities, headed by dynastic leaders called rebbes, strive to preserve their centuries-old customs by resisting the contaminating influences of the outside world. While some ultra-Orthodox rabbis now argue that a child molester should be reported to the police, others strictly adhere to an ancient prohibition against mesirah, the turning in of a Jew to non-Jewish authorities, and consider publicly airing allegations against fellow Jews to be chillul Hashem, a desecration of God’s name.

There are more mundane factors, too. Some ultra-Orthodox Jews want to keep abuse allegations quiet to protect the reputation of the community, and the family of the accused. And rabbinical authorities, eager to maintain control, worry that inviting outside scrutiny could erode their power, said Samuel Heilman, a professor of Jewish studies at Queens College.....