ROMNEY IS REAL POSITIVE CHANGE - DO NOT BE FOOLED JEWS IN PENNSYLVANIA, OHIO & FLORIDA! 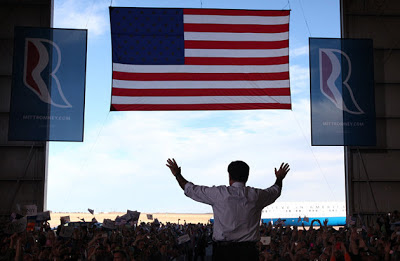 COLORADO SPRINGS, Colo.—Mitt Romney isn't known for his dramatic entrances, but in the campaign's final stretch, he's stepped up his game.

As several thousand people waited for the Republican presidential nominee at an airplane hangar here on Saturday afternoon, a campaign aide switched on the soundtrack to the film "Air Force One," known for its soaring melodies and dramatic crescendos. A few seconds later, the hangar door slowly opened to reveal Romney and his wife, Ann, exiting his campaign plane, prompting the crowd to go wild.

Romney walked the long rope line leading to the stage like a star football player introduced into the lineup. He high-fived and shook hands, grinning all the while. Once onstage, both he and his wife became emotional looking out over the crowd.

"That is quite a welcome. That is amazing, to walk in and have this kind emotion come to us. It makes me believe we can win Colorado," Ann Romney said, her voice quivering. "[It is] quite emotional, I must say, to be in this room, but it's also quite emotional to me to know how humble I feel at this moment."

Behind her, Romney nodded, clearly moved by the scene.

It was not the first time a member of the Romney clan had shown emotion as the campaign heads into its final days. On Saturday, Ann Romney walked back to say hello to reporters in the rear cabin of her husband's campaign plane and seemed almost wistful about the long campaign's end.

"Three more days," she said. "It's been a long road. ... It's been an extraordinary experience."

That seemed to capture the mood on the Romney plane, which was more packed than usual as the candidate headed out on his final weekend of campaigning.

Several of Romney's senior aides, including strategists Stuart Stevens and Russ Schriefer and longtime advisers Beth Myers and Bob White, joined up for the candidate's final days on the road. In the front cabin, they took seats with embroidered chair covers featuring the Romney campaign logo and their name.

Asked for the campaign's mood, one senior Romney aide, who declined to be named, summed it up in a few words. "Enthusiastic. Hopeful," the aide said. "Relieved."

Amid the most grueling schedule of his campaign, Romney has seemed generally upbeat, spotted laughing and walking around the front cabin of his plane. On Friday, reporters observed the candidate giggling as he slowly moved around the first few rows of his plane using his iPhone to film his campaign aides passed out asleep in their seats.

On the stump, Romney has seemed equally positive, as he has attracted some of the biggest audiences of his campaign: nearly 20,000 in West Chester, Ohio, on Friday night, and 17,000 at an outdoor amphitheater just outside Denver. At every stop, he has mentioned the "long road" he's traveled to get to this moment.

"We've journeyed far and wide in this campaign for America's future. And now we are almost home. One final push. We're gonna be there," Romney told the crowd in Colorado Springs. "Many long days, short nights. We're that close right now. The door to a brighter future is there. It's open for us. It's waiting for us."

Posted by Paul Mendlowitz at Sunday, November 04, 2012 No comments:

Posted by Paul Mendlowitz at Sunday, November 04, 2012 No comments: