Where In The World Is The Agudath Israel Now? 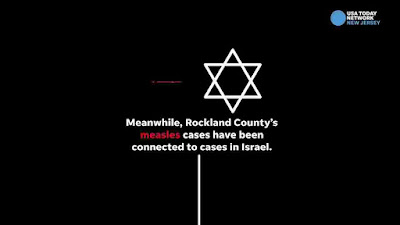 Nine private schools in Ramapo face hefty fines for failing to provide Rockland County health officials with a list of students who have not been fully vaccinated against measles. The schools are within a geographical area considered the nexus of Rockland's measles outbreak that numbers 94 cases as of Thursday.

The schools each face fines of up to $2,000 a day since Nov. 16, according to Rockland County Attorney Thomas Humbach. Administrative hearings are scheduled for Monday and Tuesday.
The county has ordered schools in the New Square, Monsey and Spring Valley area to restrict unvaccinated students from attending if the school's MMR vaccination rate is less than 80 percent. The rule isn't exclusively for yeshivas, but those are the schools that fit the parameters, county officials said.

The health department, though, can restrict school attendance under certain circumstances when there are a significant number of cases of a "vaccine-preventable" communicable disease, such as the current measles outbreak in Rockland. A similar attendance restriction has also been instituted in Brooklyn, where New York City health officials say there are more than 40 measles cases in the Orthodox Jewish community.

The county health department uses those records to verify that schools are following the department’s restrictions.

MEASLES IN ROCKLAND: Why do so many people still not know about it?

On Monday and Tuesday, county judicial officers will conduct hearings and then make recommendations to the commissioner of health, Dr. Patricia Schnabel Ruppert. The process is similar to sanitary code and Rockland Codes Initiative enforcement, Humbach said. Private school officials will be able to appear and make their case. The hearings will be conducted by Rockland County Judicial Hearing Officers Charles Apotheker and Stuart Lipkind.

Fines will be outlined during Wednesday's Board of Health meeting, which is at 10 a.m. at the Rockland County Health Department, Building F, Room 119 in Pomona. That meeting is open to the public.

Schools facing fines are:
County officials said there are around 35 yeshivas that fit the criteria for attendance restrictions and the majority have provided the requested documentation and partnered with the health department.
"I don't care what school it is, if the health department deems this step has to be taken, it will be taken," Rockland County Executive Ed Day told The Journal News on Thursday. Acknowledging pushback by some schools in regards to the county restrictions, Day said, "We will grant no quarter in protection of the health of this county."