The 17-page indictment, obtained by JTA, accuses Maklev of raping his alleged victims — sisters now aged 23 and 27 — hundreds of times since they were 6 and 7, sodomizing them, performing obscene acts on them and assaulting them while telling them that the sexual contact was required by religious law, or halacha. He also is charged with attempting to perform and performing an indecent act under deceitful pretenses on a third sister, now 29, when she was 19. 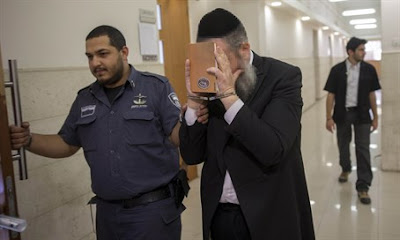 
(JTA) — A court in Jerusalem extended the remand of a haredi Orthodox school supervisor from Jerusalem whose indictment for the alleged rape of two girls from his own family is reportedly eroding taboos on reporting  sex crimes within his community.

The Jerusalem District Court’s decision Thursday on Naftali Maklev, 50, came two weeks after his May 18 indictment, the news site Kikar HaShabbat reported. According to Haaretz, the affair is leading to unusual developments within highly insular haredi Orthodox communities, including increased reporting of molestation and warnings to haredi schoolchildren to be wary even of adults known to them.

Maklev’s lawyer, Yehuda Fried, told Kikar his client was innocent and that a “detailed examination of the evidence will show the accusations and alleged evidence are made up.” Maklev is not accused of molesting pupils at the Jerusalem religious school for boys where he worked.

The 17-page indictment, obtained by JTA, accuses Maklev of raping his alleged victims — sisters now aged 23 and 27 — hundreds of times since they were 6 and 7, sodomizing them, performing obscene acts on them and assaulting them while telling them that the sexual contact was required by religious law, or halacha. He also is charged with attempting to perform and performing an indecent act under deceitful pretenses on a third sister, now 29, when she was 19.

The indictment said the alleged acts happened at Maklev’s home, at the homes of the complainants, at his office at the yeshiva and in his car. Spanning over 20 years, his actions are said to have begun in his alleged victims’ early childhood and continued until they were young mothers in their 20s.

According to the indictment, Maklev began molesting one of the girls when she was was 6, “turning her into an instrument for the fulfillment of his sexual desires.”

“The defendant used his status in the family and the community, as an authority on the Torah, and the fact that he supported financially the families of the victim, while encouraging her sense of dependence and duty,” the indictment said of one victim. “As she matured, the defendant added to these manipulations, falsehoods and lies, claiming halacha makes his actions not only permissible, but a mitzvah.”

The document also said Maklev claimed his life and health depended on the girl’s compliance and that his actions with her were necessary to repair damages to her soul sustained during a previous incarnation.

The mainstream haredi Orthodox media has ignored the case, but coverage of it in other media, including Kikar and Behadrei Haredim, as well as reports on social media is “sending shockwaves through the haredi society,” Yair Ettinger, a Haaretz reporter who covered the case, wrote in an article published last week.

Some haredi schools, including the Beit Yaakov school for girls in Elad near Tel Aviv, have handed out fliers warning pupils against sexual predators, Ettinger reported.

“In any case of doubt, respond with a resolute ‘no’,” one flyer urges. “Beware of people you know or do not know, and do not be tempted to accompany him even if he is friendly to you. Disengage, stay away and tell your parents,“ it adds.

The affair has resulted in a surge of dozens of reports about sex crimes at Lo Tishtok, a group set up by three activists six months ago to encourage victims from insular Orthodox communities to report abuse to the authorities, according to a co-founder of the group, Avigail Karlinsky.

http://jta.org/2016/06/03/news-opinion/israel-middle-east/israels-haredi-community-rattled-by-sex-abuse-case-involving-jerusalem-yeshiva-supervisor
Posted by Paul Mendlowitz at Tuesday, June 07, 2016 No comments: