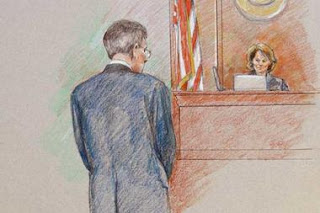 ...."Jeffs is charged with sexually assaulting two underage girls. If convicted, he could receive life in prison. He has claimed that, as the head of his church, he has the constitutional right to practice his own religion, which includes polygamy. The mainstream Church of Jesus Christ of Latter-day Saints, also known as the Mormon church, repudiated polygamy more than a century ago.

Until 10:25 a.m. Friday, Mr. Jeffs had been spectator at his own trial. Before the trial had begun, he had fired his team of attorneys, saying they could not present "a pure defense."

Then, in opening statements, he said nothing as prosecutors vowed to provide evidence that he raped a 12-year-old girl and impregnated a 15 year old.

His silence had extended to the point that District Judge Barbara Walther eventually implored: "You've sat here now for an hour and not said a word," suggesting that further silence could yield "a very bad result."

Jeffs broke that silence Friday when prosecutors introduced as evidence a list of his wives and children they said lived at Jeffs's Yearning for Zion Ranch in 2004.

But Friday, he was enflamed.

"You are now touching that which is sacred," Jeffs said in objecting to the prosecution's list.

"This must cease," he said.

"If we do not live these laws we are damned here and hereafter," Jeffs said, reading from a written statement. "We believe in a marriage system of eternity called celestial marriage, wherein celestial means heavenly authorized, not to be intervened by government intervention."

"I, the Lord God of heaven, call upon the court to cease this prosecution against my pure, holy way," he continued, saying God would strike the prosecutors with sickness and death.

When the statement was finished, he concluded, "Amen."
Posted by Paul Mendlowitz at Sunday, July 31, 2011 14 comments: