A Shul Close To My Heart Torn Apart By Strife!

This letter was sent to me a few different times, by what appears to be different people. I am not judging anyone, and I'm making a full disclaimer, I am biased on this issue. What really pains me is that this shul which began al ha'Torah v'al ha'Avoda, with no ulterior motives other than having a place to daven and learn seriously, with no political agenda whatsover, is internally collapsing from what I gather by what is being e-mailed to me.

I have no knowledge to the goings-on at all in this shul, and I have spoken to nobody about the machloket, but as Rav Pam zt"l used to say when he heard about such machloket " even if it's not true, the fact that such stories and strife appear among Yidden, that's bad enough".

So with a sad heart, I publish the very heavily edited letter. 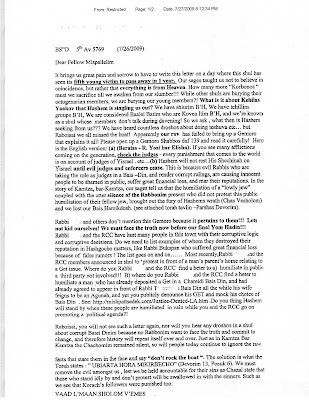