....CLICK ON IMAGE TO ENLARGE: ARE THEY NUTS OR WHAT? 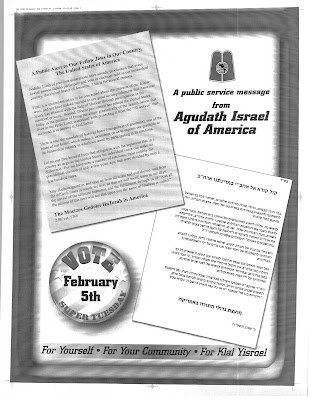 One can get seriously ill reading peoples' attitudes to the sex-abuse crisis at hand in the Orthodox Jewish community. Orthodox Judaism is disintegrating in front of our very eyes...and we're pontificating who is more at fault; the brainless-criminal rabbis or the brainless - idiot plain Jew!

There's been an utter breakdown in our humanity - our brain functions have ceased functioning as humans. We have become sub-animals; rabbis working on the survival instinct of preserving their reputations and yeshivas at all costs - not the God-given intelligence, command and instinct to protect our vulnerable children!

The Torah commands us - in the very essential mitzva of Shiluach Hakan...shalach tishalach es ha'em...send away the mother-bird before you capture the child-bird - because the suffering of the mother is unbearable for her to observe; to see her offspring - hurt, slaughtered or captured.

To me this is - and always was - the essence of our Torah ha'kdosha. Rachamim...caring for our children - indeed the essence of a viable society. The Torah understood that if we, the bnei Yisroel, were to understand the essence of this tzivui Hashem for birds/animals; we would certainly derive there-from that a parent would not be able to bear any pain heaped on their offspring and protect them at all costs; and indeed those are the instincts of normal people.

We mock, rightfully so, the degradation of society at large; look at their kids' heroes and values! Look what is recreation for them! Look at the fatherless children; in many cases the children do not even know - who - the father is - never mind having a parent to actually take care of them.

Have you been to a zoo recently? Ever notice that the mama monkey protects their baby from harm from other dangerous apes? ---------

Now - that - you - know - that there is at least one child-rapist in every yeshiva and many in your girls' schools - as bad as the Tendler Trinity of human garbage - what - are - you - idiot - parents - doing - about - it? --- Planning for Pesach? --- Which fress place serves more main dishes? Which tea room is open 24 hours? Huh? Chaim Kaminetzky cheap on the chocolates - to hell with him, we'll go to Moishe Wein. WHAT!!!! no private seder room? I'm gonna bounce that check on the momzer! -Right?

What will it take for you to realize that these "rabbis/gedolim" that you trusted to care for, and protect at all costs - the essence of the Torah - rachamim...only to now know for certain, that they are the biggest achzorim and menuvalim?--- Not all - but most!

Nothing doing...we're off to Florida, UOJ - don't bother us with your crap! OK!?

Darwin had it wrong - we are less human than the apes and monkeys. Their brains are more developed than ours, they take care of their kids, and we trust the gedolim....
Posted by Paul Mendlowitz at Friday, December 11, 2009 198 comments: