Stupid Is as Stupid Does!

The outbreak appears to have begun in Israel, and spread to American Jewish communities via people returning from visits to Israel. In New York City, the outbreak has been most heavily concentrated in Williamsburg and Boro Park; cases have also been confirmed in Midwood/Marine Park. Rockland County in upstate New York has had dozens of cases, and Lakewood, New Jersey, has had over a dozen.

Children generally must be vaccinated in order to attend school, but may receive an exemption for religious or medical reasons. Following the outbreak in Brooklyn, the New York City Health Department initially said that no unvaccinated children would be allowed to attend schools in which a measles case was reported.

Students who contract measles must stay home from school until the fifth day after the rash onset.

Yeshivos are responsible for enforcing the immunization requirements and banning students who do not comply. Failure to comply may result in the yeshivah receiving Commissioners Orders and fines. 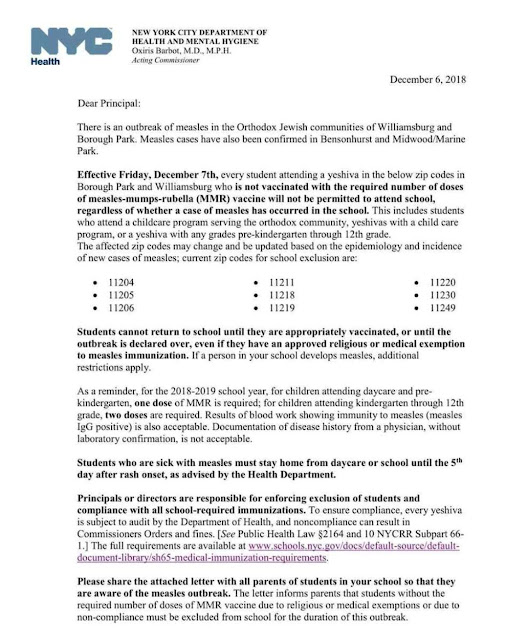 https://hamodia.com/2018/12/06/unvaccinated-children-banned-brooklyn-yeshivos-measles-outbreak/
Posted by Paul Mendlowitz at Thursday, December 06, 2018 No comments:

Druckman told Arutz Sheva that Elon’s conviction was a mistake and that he “fully believed the rabbi,” who he would allow to continue giving lessons at the Or Etzion yeshiva where Druckman serves as dean...

According to the report, a month ago, a man confessed to two leading rabbis – Haim Druckman and Shmuel Eliyahu – that Elon had sexually assaulted him during a series of meetings.

New allegations have surfaced against prominent national-religious rabbi Moti Elon, who was convicted in 2013 on two counts of indecent assault by force against a minor. Elon, the former head of Yeshivat Hakotel, was sentenced to community service and did not serve time in prison.

The new allegations were first reported on the investigative news show Uvda. According to the report, a month ago, a man confessed to two leading rabbis – Haim Druckman and Shmuel Eliyahu – that Elon had sexually assaulted him during a series of meetings he had held with the rabbi. The man told the rabbis that the assault allegedly took place over a period of time and during a number of private meetings.


In August 2013, Elon was convicted on two counts of indecent assault by force against a minor but never served any jail time for the crime. He was instead given a six-month commuted sentence which he served in community service, was also put on probation for three years, and ordered to pay the complainant NIS 10,000.

Elon denied the allegations, never admitted to his crime and never apologized to his victim, but did not appeal the conviction in the Jerusalem Magistrate’s Court.

The complainant first met with the Takana Forum, a group Torah scholars, educators, law professionals, and therapists which works to prevent sexual abuse. The forum transferred the case to Druckman and Eliyahu who initially offered the man to file a police complaint but he reportedly preferred to have the rabbis handle the complaint.

On Monday, Elon reportedly met with the rabbis and confessed to the allegations against him. He also reportedly apologized “to anyone hurt” by him. Elon apparently also agreed to demands by the rabbis not to meet privately with students, not to teach publicly and to close a yeshiva he had opened a few years ago, despite his earlier conviction.

Druckman’s involvement in the new affair is particularly surprising considering that he was one of Elon’s most ardent defenders even after the rabbi was convicted by a Jerusalem court. In 2013, Druckman told Arutz Sheva that Elon’s conviction was a mistake and that he “fully believed the rabbi,” who he would allow to continue giving lessons at the Or Etzion yeshiva where Druckman serves as dean.


Druckman, an Israel Prize laureate, said that he believed the court was mistaken in convicting Elon and that there were no witnesses to the incidents in question other than the rabbi and the plaintiff.

“I don’t believe there is anything in his Torah lessons that is not kosher, there is no reason not to learn from him or listen to Torah lessons from him,” the rabbi said.


Posted by Paul Mendlowitz at Thursday, December 06, 2018 No comments: