For the past year, the Israeli police have been investigating charges against Israeli magistrate judge, Shamai Becker. He is accused of raping his 14 year-old daughter. 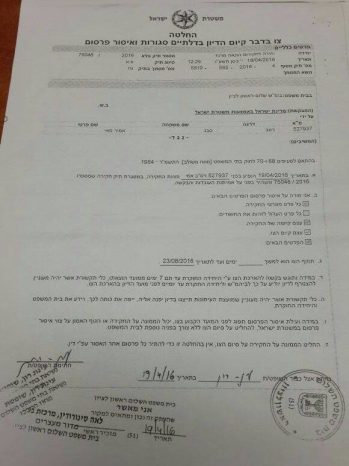 .השופט שמאי בקר חשוד בביצוע עבירות מין בבתו. צא”פ הוטל על זהותו
For the past year, the Israeli police have been investigating charges against Israeli magistrate judge, Shamai Becker.  He is accused of–depending on which source you consult–raping or fondling the breasts of his 14 year-old daughter.  The investigation has been conducted in secret.  During much of this period, Becker conducted trials and made legal rulings, many of which involved the police themselves.  It’s easy to see that the judge was in effect held hostage by the police.  If he wished to retain his judgeship he could not afford to alienate the very party investigating him.  This is certainly justice compromised.  Any defendant convicted of a crime involving police testimony now has an opening to challenge his guilty verdict. Original News1 story which was later censored, removing Becker’s picture and name from the report

In the past few days, Ynet reported that Becker had “gone on vacation” according to his staff.  He simply disappeared.  No one knew where he was or when he was returning.  Since the case has been under gag order, the media could not report his name.  But News1 and blogger, Lorry Shem Tov violated the gag order and did so.  Later News1 removed Becker’s name from its report.  Shem Tov’s blog post remains uncensored.

The police intend to close the case against Becker from lack of evidence (as opposed to lack of guilt).  This determination, according to an Israeli attorney I consulted, will likely prevent him from returning to the bench.

As an interesting piece of trivia, the judge who approved the gag order in Becker’s case is a blast from the past for long-time readers of this blog: Einat Ron, a former military prosecutor and the judge who cooperated in silencing Anat Kamm by approving the gag order in her case.  Judge Ron appears to be the police and Shabak’s go-to judge when they need a favor.  By the way, she’s been promoted since the Kamm case.  She’s now presiding judge of the Central District Magistrate’s Court.

There does seem to be a propensity toward child abuse among Israeli judges and diplomats.  I reported that Senior Judge Rafi Aranya had beaten his children and that the case had been closed by investigators out of “respect” for the dignity and privacy of his children (ahem!).  A few months ago, Israel’s consul general in Miami, Chaim Shaham, was accused of causing lacerations to his daughter’s arm when he grabbed her in the shower.  This investigation too appears to have been dropped.  Does anyone get the impression there is a culture of impunity amongst Israel’s senior civil servants?

I first learned about this story from a reader e mail.  I often get good stories sent to me in this fashion.  But I’ve never had anything quite like this happen.  Here’s the e mail:

The sheer chutzpah of an Israeli homophobe who wants to both smear me and at the same time uncover the latest Israeli news scoop is mind-blowing.  But I figured, he may be an foul-mouthed idiot, but he may also be on to a good story.

http://linkis.com/com/3wDGc
Posted by Paul Mendlowitz at Monday, August 08, 2016 No comments: