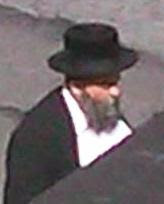 After I wrote the article on August 2 about my experience with a predator (read here) I was contacted by someone with a horrifying story that demands immediate action. This reader identified the man in my story and he painstakingly relayed details of his own ghastly experiences with this monster over three decades ago. This child molester has been targeting innocent children (and young adults) in Boro Park for over thirty years and nothing has been done! I am seeking any information on BEREL GOLDMAN, such as where he lives and where he is employed. Action (within the parameters of the law) will be taken and I pity him (and his employer) if he is currently still in chinuch.

I shudder when I think of how many victims he must have ruined for so many years. UOJ, there is a fire raging in Boro Park and it must be extinguished! The attitude of cover-up in the chassidishe velt is fueled by a clannish attitutude that is worse than the shanda of the Kolko/Margulies/Scheinberg/Belsky fiasco.

Here is the tell-all email that was sent to me by someone who has never recovered from the pain he suffered as an innocent child.

UOJ & friends, this is not a sensational piece of yellow quasi-journalism. This is a serious matter that requires the help of your vast audience. I and this victim implore the community to provide further information on:

This monster wears chassidishe garb and has been seen walking around Boro Park and Flatbush and often engages in seemingly harmless conversation with young men and children.

Email sent to me:

It took me a few days to get the courage to write back to you since I am still haunted by this guy and it brings back to me very bad memories that will live with me for the rest of my life....
I would hope that this letter gets posted on the UOJ blog and gets to the appropriate channels so that we get rid of this pervert and molester once and for all...
I have kept this in me for many years and I want to get it out of my system at this time...
I am now in my lower forties now and this started around 35 years ago when I was in the fourth grade in the Bobover Yeshiva..
The guy who we are talking about was my rebbe that year and his name is Berel Goldman...
He was in his low twenties at that time, he was very strong and muscular and he used to take me and lift me up with his hands and seat me on his lap and flex his big muscles at me and ask me if i liked it and while on his lap he would touched me all over including my penis thru my pants.
One day in middle of the year after I got to sit on his lap again, he told me to come out of the classroom with him and he took me to the bathroom and he locked the door and he exposed his penis to me and told me to rub it with my hands, I get very scared and terrified but he grabbed my hand and forced me to rub him while he unzipped my pants and was fondling my penis until he masturbated, of course at that age I did not know what this was and I started to cry, he told me that I better not tell anybody or he would punish me...I was scared and did not .a week later he did it to another kid in the class..he happened to tell his mother about it, and she called my mother and told her that he did it to me also, my mother asked me about it and I told her what happened..My mother and the other lady went to the principal and told him, and the answer was that he can not do anything about it, since this rebbe is from a prominent family in the shul and he does not want to ruin their name, our parents were furious and I left the yeshiva for a different yeshiva for the rest of the year and returned only the following year..He continued being a rebbi for a few years until he was fired and the reason was because the principal's son was to enter his grade...
After he was fired, he went to the Viener Yeshiva and was fired from there too..
Since I know him from shul, I know that he did not stop and he continues to molest kids and teenagers in shuls and in yeshivas and in mikvas..
I wrote this email with my heart full of pain of what this guy did to me and to many others...