Kids under 5 are the bulk of the more than 100,000 Americans treated in emergency rooms yearly accidentally swallowing medication 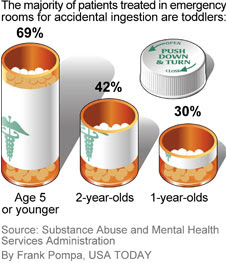 Children under age 5 make up the bulk of the more than 100,000 Americans treated in emergency rooms each year after accidentally swallowing medications. Most such poisonings occur in 1- and 2-year-olds — an age group whose curiosity and climbing skills often outstrip their judgment — according to a new report from the Substance Abuse and Mental Health Services Administration.

DEA: Clean out your medicine cabinet to keep kids safe

While 85% of children were treated and released from the ER, about 10% had more serious injuries and required hospital admission, the study says.

About 90% of child poisonings happen in the home, according to the Consumer Product Safety Commission. Thanks partly to better caps and packaging, child poisoning deaths have fallen by 80% since 1972. More than 30 children a year now die from poisoning.

It's easy to see why toddlers and preschoolers get into trouble, says pediatrician Ari Brown, author of Expecting 411. Young children explore by putting things in their mouths.

But they don't really understand the dangers of medications until about age 6, says Marcel Casavant, a pediatrics professor at Ohio State University School of Medicine.

And most people don't store medications properly, says Lara McKenzie of Nationwide Children's Hospital in Columbus, Ohio. When people are sick with colds, they often leave cough syrups and other drugs by the sink.

More and more people also now request "easy open" caps on bottles or day-of-the-week pill organizers, Casavant says. That can be especially dangerous when children get into a grandparent's open purse or begin exploring her house.

•Don't take medications in front of children, which may inspire them to try to imitate you, Casavant says. Tell children never to take medication unless you give it to them.

•Never refer to pills as candy.

•Because children can sometimes open child-resistant caps, keep medications out of sight, out of reach and in a locked container, Casavant says.