The rabbi would sometimes take advantage of the meetings and of his position in the community to engage in sexual acts with women, including minors, according to the charges against him.... 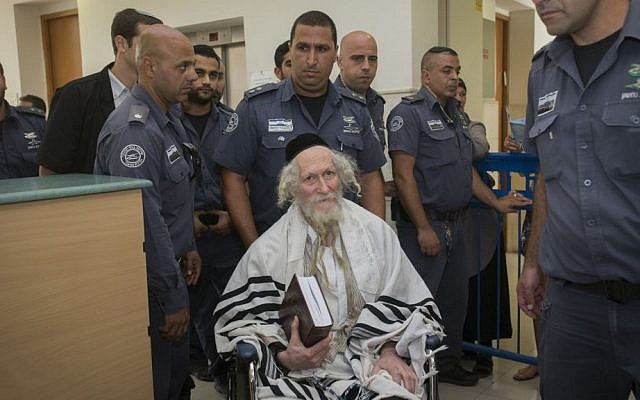 Eliezer Berland  at the Jerusalem District Court in Jerusalem

Three women filed a civil suit Wednesday against a convicted sex offender rabbi and fifteen others who they claim enabled him.

The women are suing Eliezer Berland, 80, for NIS 4 million ($1.1 million) and also demanding that he be barred from leaving the country until the case is concluded, Channel 2 reported.

The suit was filed in Jerusalem District Court by the two women, who Berland admitted to and was found guilty of assaulting, along with another woman who was not involved in the criminal case against the rabbi. 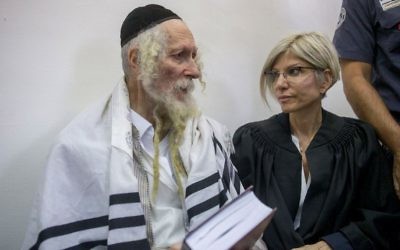 Berland, who is the leader of the Shuvu Bonim Bratslav Hasidic group, was sentenced to 18 months in jail in November 2016 after being convicted on two counts of indecent acts and one case of assault.
He was released earlier this year after serving five months behind bars, in part due to suffering from cancer. He was given permission to move to a hotel next to Jerusalem’s Hadassah Medical Center on Mount Scopus, where he was placed under house arrest. His sentence is due to end next week.

“There are not enough words to denounce the defendant,” the petition read. “There is no real way to atone for what he did, and no amount of money in the world can will fully and completely compensate for the indescribable suffering that he caused the plaintiffs (and others).”

The suit was filed against the rabbi and his wife as well as rabbis and others associated with Shuvu Bonim, the ultra-Orthodox news site Behadrei Haredim reported.

According to the court document, seen by the news site, these people knew of the crimes but covered for him. “Not only did they give the defendant a framework and platform to advance himself, but they explicitly justified and vindicated his actions,” the petition said. “They even went so far as to praise his actions as ‘lofty’ and ‘elevated’ and as ‘rectifying supernal worlds.'”

Channel 1 tweeted what it said was a recording of Berland’s wife in which she describes her husband as a “sadist” and said that others warned her to keep away from him.

Last week the rabbi was authorized to travel to Uman for Rosh Hashanah, the Jewish New Year. Each year tens of thousands of Jews converge on the Ukrainian city, which is the final resting place of the Rabbi Nahman of Bratslav, an 18th-century luminary who founded the Bratslav Hasidic sect.

While there it was reported that his followers were involved in clashes with other Bratslav Hasidim. 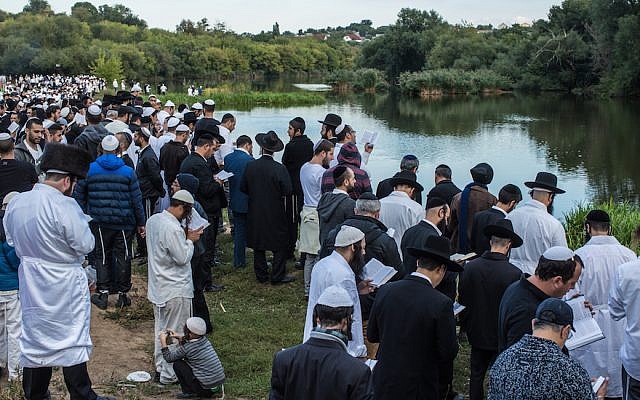 Hasidic pilgrims praying near the burial site of Rebbe Nachman of Breslov in Uman, Ukraine

Long considered a cult-like leader to thousands of his followers from the breakaway sect Shuvu Bonim, Berland fled Israel in 2013 amid allegations that he molested two female followers, one of them a minor.

According to the criminal indictment, Berland would often receive people in his homes in Jerusalem and in Beitar Illit and held private meetings intended for spiritual guidance, counseling or benedictions. The rabbi would sometimes take advantage of the meetings and of his position in the community to engage in sexual acts with women, including minors, according to the charges against him.

The trial ended with a plea deal in which the rabbi admitted to the charges and was sentenced to jail and to pay NIS 75,000 in compensation. Berland reportedly told the judge that according to biblical law “such acts are punishable by burning and stoning. Today times have changed and there is a lot of leniency, but it does not detract from the severity of my actions.”

He was on the run from authorities until 2016, eluding several Israeli attempts to extradite him. He moved between Zimbabwe, Switzerland, the Netherlands and South Africa, accompanied by a group of devout followers numbering around 40 families.

Following a plea bargain the Jerusalem Magistrate’s Court convicted and sentenced him in November 2016, though some seven months that he spent in jails in South Africa and the US were counted as time served.