Two prominent Orthodox rabbis — one a former president of the Rabbinical Council of America (RCA) — spoke out forcefully this past week on the need for transparency and justice on sexual abuse in the community, and criticized the Orthodox Union (OU) and the RCA for not taking a stronger stand against a well-known rabbinic authority on kashrut who defended a confessed pedophile.

Rabbi Heshie Billet, spiritual leader of the Young Israel of Woodmere and a former president of the RCA, wrote an Opinion column on The Jewish Week website. The piece, “Not Enough Progress By Rabbis, Leaders On Dealing With Sexual Abuse,” described the role Rabbi Yisroel Belsky, a major kashrut expert and halachic consultant to the OU, played in publicly defending a confessed sexual abuser, Rabbi Yosef Kolko, who taught youngsters at a Lakewood, N.J., yeshiva.

Further, Rabbi Belsky accused the parents of the victim of going to the police, and wrote that one who does so is guilty of being a moser, the rabbinic term for a Jew who informs on another Jew, and, wrote Rabbi Belsky, “has no share in the world to come.”

Under communal pressure, the boy’s parents moved away from the Lakewood community.

“The OU has refused to publicly rebuke or take any action against Rabbi Belsky,” Rabbi Billet wrote, calling on the major Orthodox group to “publicly condemn his defiance of the rules of the RCA and the OU,” which say child abuse must be reported to the secular authorities.

Mayer Fertig, chief communications officer of the OU, told The Jewish Week that while the organization has “high regard” for Rabbi Belsky in terms of his kashrut expertise, it “profoundly disagrees with his conclusion and whatever actions he may have taken” regarding the Kolko case, and has told him so in private conversations.

“In no way does Rabbi Belsky speak for the OU,” Fertig said.

Several sources say OU officials were embarrassed and angered when Rabbi Belsky publicly came to the defense of Rabbi Kolko several months ago in a letter distributed in Hebrew in Lakewood. But insiders acknowledge that no action was taken against him because his kashrut expertise is highly respected in the haredi community, a major market, and there is concern that if he were to be terminated or publicly called out, some haredim would look elsewhere for kosher supervision.

“You can make a strong argument that principle should trump all,” one OU source noted, “but it’s not a simple issue here, and the pragmatists want to keep it quiet.”

The OU is by far the world leader in the field of kashrut supervision.

Rabbi Efrem Goldberg, spiritual leader of the Boca Raton Synagogue in Florida, in his weekly column to congregants, referred to the Belsky incident without mentioning names.

Among other cases cited he wrote: “When a major Jewish organization retains a rabbi who continues to defend a pedophile who pled guilty in court, and continues to defend a letter he wrote stating that the victim who reported the pedophile is a moser who has no portion in the world to come, it is on the wrong side of this issue.

“We, the rabbinic community and the leadership of the Modern Orthodox establishment,” Rabbi Goldberg wrote, “are in profound need of collective teshuva [repentance].”

Similarly, Rabbi Billet wrote that “the fact that communal leaders … are protecting and enabling abusers, or condemning legitimate accusers, underscores that our community still has a long way to go.”

On Marrying a Survivor of Childhood Sexual Abuse

Dealing with misinformation, feeling powerless, and slowly getting better together
Shonna Milliken Humphrey


I thought the article would validate my husband’s experience. That’s why I emailed him the link to the decade-old New York magazine article about his alma mater, the American Boychoir School for vocal prodigies, where alumni from as late as the 1990s estimate that one in five boys were molested. Boys like Travis.

“It used to feel like an isolated incident that affected just me," Trav said.

It was the end of my workday on an October afternoon; I had just set my keys on the kitchen table. My coat was still buttoned.

“Now I know I spent nearly three years of my childhood at a boarding school not just with random pedophiles, but in a culture that allowed it.”

As his wife, how do I respond? That he survived? That he’s brave? That he’s a hero for letting me talk about it? That I will stand beside him with a personal mission and public vow that nobody will ever hurt him, physically or emotionally, again, the way they did during his 30 months as a choirboy from 1988 to 1990?.

Trav believes his story is too familiar to be interesting. “I’m just another kid who got molested.” This breaks my heart to hear, but he’s not wrong about his story not being unique: The generally accepted estimate is that one in six men are sexually abused as children.

When high profile cases dominate the news, I feel for the victims, but I also scan for images of their partners and wonder how they deal with it. I want to ask what’s inside their medicine cabinets and if their husbands sometimes wince when touched, too.
I want my husband to sleep at night, and if it takes a machete in the bedroom, I‘ve learned not to mind.

What Can Be Done About Pedophilia? 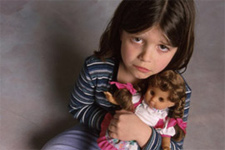