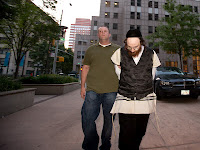 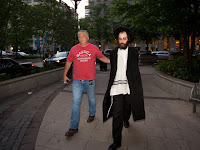 BROOKLYN — Four men were arrested Thursday morning for allegedly offering a $500,000 bribe to a sexually abused teenager to get her to drop charges against a popular Orthodox community counselor who is presently on trial in Brooklyn.


The four suspects — three of whom are brothers, sons of the Mishkoltz Rebbe — allegedly offered the hush money to the boyfriend of the victim, who accused Nechemya Weberman, 53, an unlicensed therapist, of molesting her.

She claimed Weberman had been abusing her for three years, starting when she was 12 and began receiving counseling from him. She is now 17.

Weberman’s arrest created a firestorm of controvery within the Orthodox community as factions took sides, with one group holding fundraisers for the accused — they raised more than $500,000 for his defense — while others vociferously protested the perceived attempt to protect a possible child abuser rather than his victim.

One of four men arrested for attempting to bribe a woman who was allegedly sexually assaulted by a community counselor in Brooklyn.

The two groups nearly came to blows during protests following a recent appearance by Weberman in a packed courtroom. His supporters insist he is incapable of a crime and accused the girl of lying. Her supporters stood firmly behind her and said she was being victimized twice.

According to sources, the four suspects reached out to the victim's 22-year-old boyfriend.

“They contacted the boyfriend because they thought they could get to her through him,” a source said.

The men, speaking in Yiddish to the boyfriend, offered to pay $500,000 and insisted that he, his girlfriend, Weberman and the community as a whole would be better off if she took the bribe and the case went away, sources said. They suggested she could even move to Israel and start a new life.

The defendants also allegedly threatened to ruin the boyfriend's business. He owns a Kosher restaurant, and they warned him they would rip down the sign on his store if his girlfriend did not go along with their plan. One afternoon, in fact, they allegedly tore down the sign to show they meant business.

The four suspects were rousted out of their homes around early Thursday morning, handcuffed and taken to the Brooklyn DA’s office on Jay Street shortly after 5 a.m.

They are scheduled to be arraigned later this afternoon, sources said.

Since 2009, DA Charles Hynes' office has arrested more than 100 sex offenders within the ultra-Orthodox community after launching an outreach program called “Voice of Justice,” or Kol Tzedeck in Hebrew, to get victims to come directly to his office with complaints.

The arrests again focus attention on suspected widespread intimidation of victims of pedophilia and sex assaults within the ultra-Orthodox community, which has a historical cultural ban on cooperating with authorities and insists victims bring their complaints only to local rabbis.

In the past, victims who went to police were subjected to harsh harassment, ostracized, kicked out of synagogues, thrown out of schools and even tossed out of their homes.

The DA recently created the joint task force with the NYPD's Special Victims Squad after Hynes was criticized for not doing more to crack down on victim intimidation within the community.

In a recent interview with “On The Inside,” Hynes said he hoped any future arrests for coercion or bribery would send a powerful message that might break the community’s traditional code of silence, known as “Messira,” a Hebrew epithet for "informant." 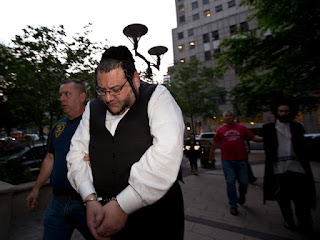