MEL KAMINSKY AKA MEL BROOKS: "ITS GOOD TO BE A GADOL" 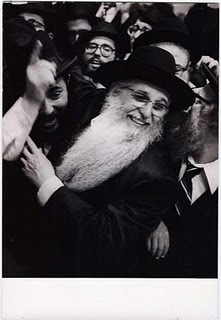 By Tropper is Troubled:
Documents from the UOJ Archives:

The signed letter from Monsey that was kvetched out by Tropper on February 15th, in point 3, names Rabbi Aaron Schechter of yeshiva Chaim Berlin as one of three recommended names that Tropper would like to see -- NOT to rebuke Tropper -- but to "help" appoint a new rosh yeshiva for his totally ruined (by him) Kol Yaakov outfit. The other two names are Wachtfogel and Wolpin who carry no power in Agudath Israel of America's vaunted Moetzes, simply because it is Aaron Schechter who wields all the power at Agudah with the help of real estate manipulator/loan shark Abe Fruchthandler, who is also Chaim Berlin's chief honcho money man.

Now, why would Tropper want to bring in Aaron Schechter? The answer is actually very simple, as has been explained a few times in depth to those who have been reading the Tropper is Troubled chronicles for the past number of months: Aaron Schechter is the one big shot rabbi who IRRATIONALLY LOVES TROPPER and put Tropper on his feet, helped him build his hole in the wall yeshiva and stood by him when Tropper was divorcing his first wife while cavorting with his future second wife, and all the while Schechter also knew all about Tropper's fatal attractions and weakness for womanizing, and much worse yet, Schechter -- did NOT stop Tropper -- he rather emboldened him and built him up, and now look what's happened.

But all that Tropper did wrong was always forgiven and overlooked by Schechter because Tropper was able to furnish Schechter with something he prized more than gold, a nucleus of submissive disciples trained by Tropper who came to Chaim Berlin and served as "role models" for the more lively Brooklyn talmidim after Schechter had purged them and threw many of them out together with his own yeshiva's mashgiach ruchani, Rav Shlomo Carlebach (The singer's cousin by the same name). SCHECHTER LOVES THE KOL YAAKOV MODEL OF ZOMBIE TALMIDIM and now he is going to try to do life support for the yeshiva (Kol Yaakov) he loves so much in his own twisted and demented way!

Without rehashing all the details again,(see the UOJ documents below), Rav Carlebach went to multiple batei din, including that of Rav Moshe Feinstein and Satmar to present his claims but Schechter and Fruchthandler REFUSED to appear, and in turn they have since then been in contempt of several batei din, making them into mesarvim ledin and lo tzayis dino, that puts them into automatic cherem. It was also a huge Chillul Hashem and in many ways it was probably the incubator for Tropper's Chillul Hashem, as Rav Carlebach warned the Agudath's Zwiebel in writing then that a Chillul Hashem does not go away, it incubates like a cancer and comes back to haunt its perpetrators.

And indeed now, finally, it is no surprise that the chief perpetrator of the Chillul Hashem 30 years ago (who now has cancer), who threw his own yeshivas glorious mashgiach into the gutter and traded him in for the likes of servile (to Schechter) Tropper and his zombie lobotomized talmidim, instead, now rears his head like a primal python and agrees to have his name put on paper as the "big Agudath Israel puff daddy" -- NOT to denounce Tropper and his misdeeds -- but save the guttersnipe Tropper who Tropper invokes as the one to appoint a future "rosh yeshiva" for Kol Yaakov (it won't last much longer, they will be closing very soon, no one wants to go to a place run by a publicly unmasked and now certified menuval shebemenuvalim).

Note that Aaron Schechter, the 85 year old mechutzaf and menuvel in his own right, -- and still active bully, throws in his gauntlet -- NOT to reprimand Tropper -- but allowing his name to appear on paper for "rabbi" Leib Tropper (it's typed that way), as Schechter the original lo tzayis dino the scorner of batei din and creator of Chillul Hashem comes -- NOT to punish Tropper -- but to give his moral support and public name to Tropper the shiksa [now Tropper's Jewess] gang-banger with his own WIFE, the menuval shebemenuvalim and creator of a global Chillul Hashem, that grows not just like a festering cancer but like a mushroom cloud destroying all in its wake.

Beware, Schechter (and Fruchthandler) of Chaim Berlin cometh, tell them to go home to Brooklyn, where they can keep an eye on sheitel stores and enjoy Michael Hersh, the unapologetic crazed BT disciple of Schechter and kidnapper of Isaac Hersh - sitting next to him. Schechter must be told to stay away and keep out of the global mess he helped to create by inflating and keeping alive the Tropper monster.

THE LOW-LIVES AGUDATH ISRAEL DELEGATES ARE COMING TO MONSEY --- NO GOOD CAN COME FROM THESE ACHZORIM!

CLICK ON IMAGES TO ENLARGE DOCUMENTS FROM THE UOJ ARCHIVES: 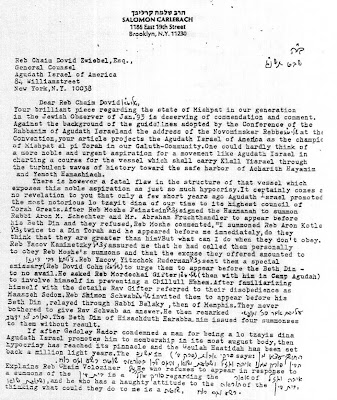 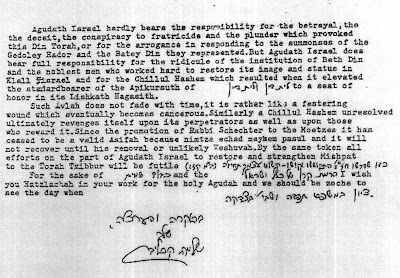 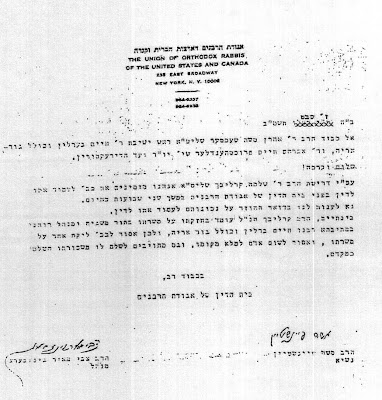 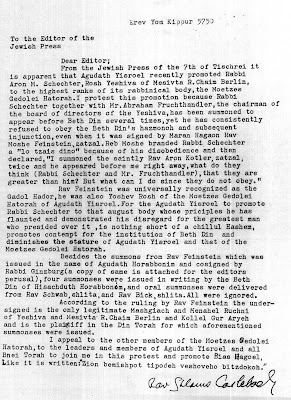