Four families aren't cooperating with the Health Department's investigation, according to a spokesman... 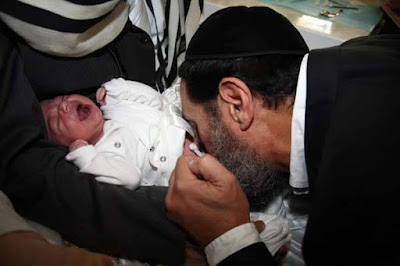 Four families aren't cooperating with the Health Department's investigation, according to a spokesman.

WILLIAMSBURG — A Health Department investigation into who infected four infant boys with herpes during Orthodox Jewish circumcision ceremonies has been thwarted because the community — including the children's parents — refuses to cooperate, the city said.

Only two of six families whose babies contracted herpes since 2015 from metzitzah b'peh, a religious rite that calls for a trained devotee, or mohel, to clean circumcision wounds by oral suction, have provided the names of the practitioner, according to Health Department spokesman Christopher Miller.

"Unfortunately, some in the community are resistant to sharing the name of the mohels," Miller said. "This is a very insular community. This is a very religious ritual." The city ordered the two mohels who were identified to stop performing metzitzah b'peh in mid-March and they could face civil and criminal fines and punishment if they don't comply, under a revised city policy. They have to test negative for herpes simplex antibodies before the city will rescind the order, Miller said.

The men were asked informally by the Health Department not to perform ritual when the city found out about the infections of two babies in December of 2015 and July of 2016, Miller said.

Health Department officials said they were able to track the herpes infection to the mohels because of the timeline of when and where herpes blisters appear on the newborn. Because they appear in the genital region five to seven days after the baby's eighth day of life, when the bris takes place, health officials pinpoint the mohel as source of the virus.

A herpes infection in an infant can cause brain damage and even death.

Orthodox leaders have said they were cooperating with authorities, but questioned how pervasive the problem is.

Rabbi David Niederman, the head of United Jewish Organizations of Williamsburg and North Brooklyn, an umbrella organization for the area's Orthodox community, said in an earlier interview that they were fully cooperating with the city, though he highlighted, "the sheer numbers of metzitzah b’peh which are done annually here in the city and in the Jewish community all over the world,” where no baby boys contract herpes.

“This is a religious practice that has been going on for thousands of years," he said.

“We have been working with different authorities and we are ready…to determine who the cause is. If anybody is the cause, not only will the community actually ban him, that person himself would refrain..to ensure that anybody who infects a child is taken off the practice,” Niederman said in an earlier interview.

He could not be reached for comment Tuesday because of the Passover holiday.

A source privy to discussions about the infection issue, who asked not to be named because he was not authorized to speak about it, said that the community was skeptical that the mohels had caused the infections and believed that Health Department officials just wanted to end metzitzah b'peh.

"That’s why we’re not willing to give out the mohels. We know the city is going to ban them without giving them due process,” the source said. "There is not proof that they actually infected the baby."

“It has to be proven, not blind accusation," the source said. "We believe there is a group of overzealous officials in the Department of Health whose goal is banning the practice entirely. It's just a step for them."

"The health of infants is our primary concern, which is why [we] recommend against direct oral suction all together," Miller said.

Health experts said they are confident that the mohels are infecting the infants, though they admit definitive proof is elusive.

The agency could, theoretically, outsource the genetic sequencing of viral samples to research laboratories, according to Dr. Stephen Morse, a professor of epidemiology at Columbia University Medical Center.

But, he added, "I think, based on location of the lesions and time, the simplest hypothesis" — in this case, transmission via metzitzah b'peh — "seems to be the most likely."

Whether or not mohels are the definitive source of the infection, if they test positive for herpes simplex, they shouldn't perform the ritual either way, Miller said.

"Anyone infected with [herpes] simply should not be placing his mouth on an infant’s open wound because of the risk of infection,” Miller said.

Since 2000, the controversial practice of metzitzah b’peh has been linked to two deaths and two cases of brain damage and there have been 24 laboratory-confirmed cases of herpes infection, according to Health Department alert sent out to doctors on March 8 following the most recent infection.

There are dozens of well-known mohels within Brooklyn's Orthodox community, often doctors or rabbis, who are trained in the sacred ritual of metzitzah b’peh.

Rabbi Nuchem Rosenberg, the Williamsburg rabbi who faced retaliation and physical attacks for his advocacy on behalf of children who'd been sexually abused by rabbis, worried parents of sick babies were being silenced by community leaders, much the same as they had been in cases of sex abuse.
"The only [reason] why they're not coming forward is because they're being threatened, ostracized," he said. "You don't know what kind of intimation goes on in this community."

Commissioner Order 1 3-17-17 by DNAinfoNewYork on Scribd

Commissioner Order 2 3-17-17 by DNAinfoNewYork on Scribd


https://www.dnainfo.com/new-york/20170418/williamsburg/herpes-de-blasio-metzitzah-bpeh-health-department-herpes-simplex-virus-cdc
Posted by Paul Mendlowitz at Wednesday, April 19, 2017 No comments: