The elusive rabbi has been handed over to the International Criminal Police Organization (Interpol), finally paving the way for his extradition to Israel, where he will stand trial for a variety of sex crimes.

Extradition of Eliezer Berland begins, as own son shuns him 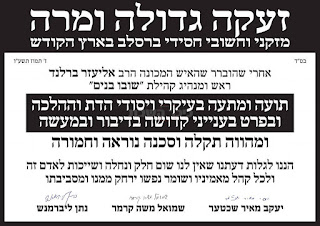 The four year international odyssey of Rabbi Eliezer Berland is about to come to an end.

The fugitive rabbi and spiritual leader of the Shuvu Banim yeshiva in Jerusalem fled Israel four years ago, following allegations of sexual misconduct with female members of the religious movement he founded within the Breslov stream of Hasidism.

Since then, Israeli authorities have sought his extradition, tracking him across the United States, Italy, Morocco, and Switzerland.

Finally, in 2015, Berland was arrested in South Africa, though he was not transferred for extradition until this week.

Now, however, the elusive rabbi has been handed over to the International Criminal Police Organization (Interpol), finally paving the way for his extradition to Israel, where he will stand trial for a variety of sex crimes.

While officials at the Shuvu Banim yeshiva maintain Berland’s innocence, Berland’s son, Nahman, and leading Breslov rabbis have condemned him and warned the public to steer clear of the fugitive rabbi and his teachings.

On Monday, BeHadrei Haredim publicized a recording of Nahman Berland lambasting his father as a “criminal”.

“[H]e pretends to be a great saint,” the younger Berland said. “My father has no shame….when people know about his crimes they won’t come near him; my father is such a criminal – either he’s totally wicked or he’s mentally ill, and I don’t care which.”

Nahman Berland also railed against some of his father’s followers who he claimed dismissed his crimes.
“So they say my father is god, so everything is permitted to him,” said Nahman, calling such ideas “Christianity”. “You’re Christians, you are.”

“We hereby announce our view that we have no part or share or ties with this man or any of his followers, and anyone who cares for his own wellbeing will keep his distance from him.”