For God, For Country, For freedom from abuse from the Church, Yeshivas, summer camps, Jeffrey Epstein, the Boy Scouts, donkeys, camels and goats ---- Moshiach NOW! 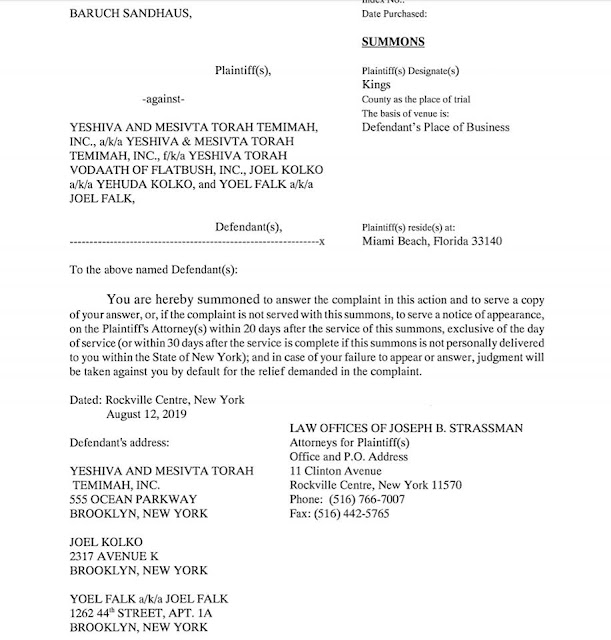 Agudath Israel and the Catholic Church for many years were the biggest lobbyists in the New York legislature trying to stop the State of New York from passing laws to extend the statute of limitations in child rape cases. This year New York passed a law that gives victims one year to file any lawsuit for molestation, with no limitation. After the one year window closes a victim can sue until he reaches the age of 55. The Catholic Church dropped opposition to these new laws when it was clear they would pass.

Agudath Israel, on the other hand, has engaged in fear mongering, publicly stating that Jewish day schools will face bankruptcy and close down if victims come forward and sue. Schools that harbor pedophiles should be shut down. Had the Catholic Church and Agudath reported pedophiles to the police, rather than protected them for all these years, there wouldn’t be rampant abuse and molestation in the Catholic, Jewish day schools and summer camps.


Today the New York courts were swamped with new molestation filings under the Child Victim’s Act. Most of the cases were brought against the Catholic Church, the Archdiocese, the Boy Scouts and Jeffrey Epstein. I haven’t seen any new cases filed against Jewish institutions or Rabbis. If you have been molested by your rabbi thirty years ago I would suggest you contact Nahid A. Shaikh, of the giant powerhouse law firm of Robins Kaplan. Shaikh is an associate there and has been filing most of the cases against the Archdiocese. Shaikh graduated top in her class at Cordozo Law School, of Yeshiva University, and made Magna Cum Laude, and the Order of the Coif, whatever that is. According to Webster’s Dictionary a coif is a yarmulke for women. Shaikh is a common name in India. I don’t think Nahid is a Jewess, but you never know.

Nahid alleged in every one of her lawsuits, possibly hundreds, the following: “The hierarchy of the Roman Catholic Church and, by implication these Defendants, have been aware of the serious problem of clergy sexual abuse of children since at least the 1800s.” You can read one of the many child abuse complaints she filed in New York County court today:

A woman named Jennifer Araoz filed a case against Jeffrey Epstein today, in which she alleged she was raped by him as a high school student when she was 14. She alleged that Epstein had a room filled with stuffed animals which he claimed he shot. She stated that Epstein had a room modeled after a room in the White House which he called “the Blue Room.” She also said that his bathroom had a pair of fake boobs on the wall so that he could look at them or play with them while he was in his bathtub. You can read her complaint below:

For God, For Country, For freedom from abuse from the Church, Yeshivas, summer camps, Jeffrey Epstein, the Boy Scouts,  donkeys, camels and goats --- Moshiach NOW!

https://larrynoodles.com/ny-courts-flooded-with-new-child-rape-cases-filed-today/?fbclid=IwAR18VcfoWwqJYM-Nlb78Zs67YYOp821Am4OneAJozTboYWmzqXLUORrl6xk
Posted by Paul Mendlowitz at Thursday, August 15, 2019 No comments: