Do Pedophile Clergy And Their Enablers Get What They Deserve?

Will the punishment ever fit the crime? 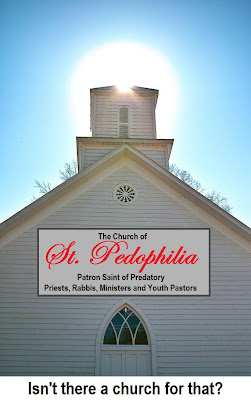 PHILADELPHIA -- Msgr. William J. Lynn, a former cardinal's aide, was found guilty Friday of endangering children, becoming the first senior official of the Roman Catholic Church in the United States convicted of covering up sexual abuses by priests under his supervision.

In other parts of the American religious landscape:

- NEW YORK -- Four men have been indicted for trying to bribe and threaten a victim into dropping a case against a rabbi accused of sexually molesting her in a close-knit Orthodox Jewish community in Brooklyn.

- "Southern Baptists should heed this lesson from the Penn State scandal. Effective accountability systems require the involvement of outsiders for the sake of objectivity."

Sexual child abuse among the religious is now considered a pandemic: no longer can the term "pedophile priests" be used to quite the degree it has been. Studies have shown that the percentage of child molesters is just as high in Protestant denominations and Jewish Synagogues/Yeshivas.

In the last five years, there have been more than 3000 reported cases of child abuse. Insurers to Protestant churches report at least 3-400 cases per year . And as far as pedophilia is concerned, a vow of celibacy has little to do with it. We have come to an age of finger-pointing and counter finger-pointing, with few answers as to the cause, and even fewer answers as to how it should be dealt with.

And the cover-ups ruined lives and muddled affairs for over four decades, with whistle blowers being portrayed as psychologically disturbed malcontents. Victims described years of continued abuse, horrific pressure to "forgive" their abusers and guilt. But as the abuse cases, the arrests, the trials, the settlements pile up, one question is still unanswered: is justice being served? The above-mentioned Monsignor Lynn will get a maximum of six years in prison for enabling pedophile priests under orders from an even higher-ranking prelate (now deceased). What will the four Hasidim get for threatening a victim?

The "REV/(RABBI)  Syndrome" and "Abuse of Forgiveness"

Amidst all the scandals and arrests, there lies the faint feeling that the the perpetrators and their enablers are treated with a lighter form of justice than others. Yes, there are the occasional strong penalties, but non-clerical pedophiles as a whole receive harsher sentences: the automatic respect given a member of the clergy extends to the clergy's personal life. What can be called the "REV Syndrome" (blind respect for any member of the clergy simply because they are clergy) takes affect immediately and the community at large tend to take a more lenient attitude. The "He's just human" meme seldom means that the offending cleric be chastised in the same manner as lay ("secular") person or non-congregant.

Another mitigating factor in leniency is what noted author Janet Heimlich* calls " The Abuse of Forgiveness " in which she describes the act of forcing child abuse victims to forgive their abuses. This abuse, however, also radiates out into the religious community. For example, Jimmy Swaggart's congregation seemed to forgive him, and while his direct congregation has decreased in number, he continues to broadcast to over 104 countries.

Monsignor Lynn's own lawyer told the jury that "in this trial, you have seen the dark side of the church."

But the "dark side" caused by blind respect, abuse of forgiveness and the righteous arrogance leading even whole denominations to refuse investigation, needs to be addressed along with pedophilia and enabling child abuse.