Accuser: Man Who Was Supposed To Be Counselor, Molested Me For 3 Years 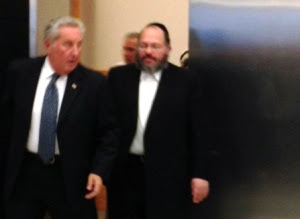 In a quiet, controlled voice, the now-married 17-year-old said she endured years of abuse at the hands of 54-year-old Nechemya Weberman.

The teen’s father had taken her to Weberman for counseling because he thought she had a boyfriend, which was prohibited in the community, 1010 WINS’ Juliet Papa reported.

However, the teen claimed the counseling turned into undressing, touching and other sexual contact.

The teen told a packed courtroom that from her first meeting with Weberman in an office next to his Clinton Hill apartment, the much-respected Orthodox Jewish leader sexually abused her.

The accuser said that Weberman would triple lock his door before the abuse, which allegedly took place twice a week for the three years.

At one point, the teen said she stopped eating for three days. The accuser said she was so depressed she couldn’t stop or even talk to Weberman.

The teen also described another incident in which she claimed Weberman came to her home.

“He got into bed with me and I wanted to die,” the teen stated in court.

She said she was eventually was able to tell a school counselor what was taking place.

Weberman has pleaded not guilty to charges of committing a criminal sex act, rape, endangering the welfare of a child and sexual abuse.

Lawyers for Weberman have argued that the allegations being brought against their client are false.

Weberman is expected to testify in his own defense later in the week.

Earlier this year, a controversial fundraiser was held in the Hasidic community to raise Weberman’s legal funds.


The abuse began when the girl was 12 years old, prosecutors in State Supreme Court in Brooklyn said on Monday. She was sent to a prominent man in her ultra-Orthodox Jewish community for counseling, and prosecutors said the man sexually molested her over the next three years.

But lawyers defending the man, Nechemya Weberman, 54, of Williamsburg, Brooklyn, told a far different story during the opening arguments of his trial. The girl, a defense lawyer told the jury, had hatched the sordid tale of abuse as an act of revenge against Mr. Weberman and against a religious community she found stifling and rulebound.

As proceedings began during the trial of Mr. Weberman, who is accused of 88 counts of sexual abuse of a minor, it became clear that the community itself, as well as Mr. Weberman, would undergo scrutiny during what is expected to be an emotional week of sexually explicit and culturally intricate testimony.

Both the prosecution and the defense informed the jury that the Satmar Hasidic community, to which Mr. Weberman and the girl belonged, was so rigid that questions from a young girl about something as simple as the proper length of a skirt could lead to mandatory counseling, and even expulsion from school. The accuser in this case, both sides said, was just that kind of girl: a free spirit whose questioning and challenges to authority landed her in trouble.

“She was going off the path,” said Kevin O’Donnell, an assistant district attorney. “She was being a little bit different.” In response, Mr. O’Donnell said, she was branded a “heretic” by her Satmar girls’ school, the United Talmudical Academy in Williamsburg, and her parents were required to send her to therapy.

What happened next is in dispute. The prosecution says that Mr. Weberman, the counselor whom the girl began seeing, forced the girl to perform oral sex on him on multiple occasions. He is also accused of touching her breasts and vagina during sessions, which were held mostly in his home office. The prosecution said he was unlicensed in any mental health profession.

“When you think about it,” Mr. O’Donnell said, the girl’s parents “were actually paying the defendant to have sex with their daughter,” which he did, “over and over again.”

The girl, who turns 18 next week, told a licensed counselor in 2011 at a new school outside of her neighborhood about the abuse allegations, and that counselor reported them, Mr. O’Donnell said. “She eventually got the courage to come forward,” he said.

Lawyers for Mr. Weberman, however, argue that the young woman fabricated the allegations because she was furious at Mr. Weberman for what she thought was a betrayal of her trust. At age 15, they said, she had revealed to Mr. Weberman that she had a boyfriend — a serious breach of the community’s stringent rules — and then, a defense lawyer said, she concluded that he told her parents about it.

“There was only one answer,” said George Farkas, the defense lawyer, “vengeance and revenge against Nechemya Weberman, and through this, to bring down the entire community that either supported him, or of which he was a part.”

Mr. Farkas also argued that the girl’s family had a business dispute with Mr. Weberman that may have also played a part in a desire for revenge.

Posted by Paul Mendlowitz at Tuesday, November 27, 2012 No comments: