“We enshrined in law the basic principle of our existence. Israel is the nation state of the Jewish people, that respects the individual rights of all its citizens. This is our state — the Jewish state. In recent years there have been some who have attempted to put this in doubt, to undercut the core of our being. Today we made it law: This is our nation, language and flag.” 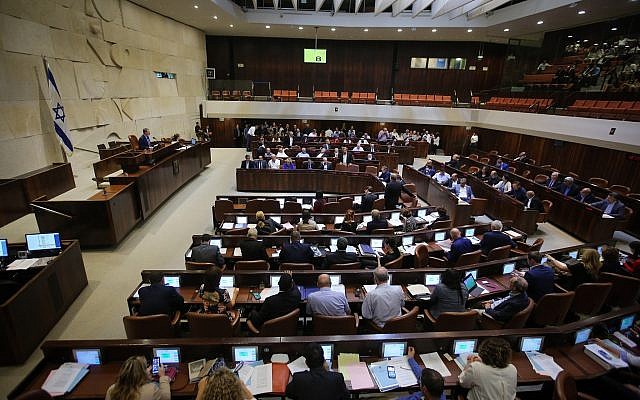 The Knesset overnight Wednesday-Thursday passed into law the contentious nation-state bill that for the first time enshrines Israel as “the national home of the Jewish people” in its quasi-constitutional Basic Laws.

Lawmakers approved the bill in its second and third readings overnight, with 62 voting in favor, 55 opposed and two abstaining, after hours of heated debate in the Knesset chamber.
Similar to a constitution, the Basic Laws underpin Israel’s legal system and are more difficult to repeal than regular laws. The nation-state bill, proponents say, puts Jewish values and democratic values on equal footing. Critics, however, say the law effectively discriminates against Israel’s Arabs and other minority communities.

The law also declares that Jerusalem is the capital of Israel, sets the Hebrew calendar as the official calendar of the state, and recognizes Independence Day, days of remembrance and Jewish holidays. One clause of the bill downgrades the Arabic language from official to “special” standing, but also cryptically stipulates that “this clause does not harm the status given to the Arabic language
before this law came into effect.” Read the full text of the law here. 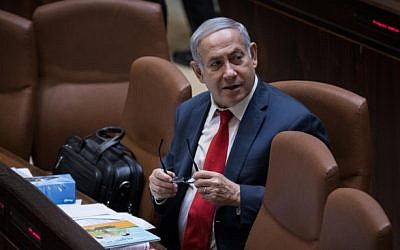 Prime Minister Benjamin Netanyahu at the Knesset plenum on July 18, 2018

Upon its passage, Prime Minister Benjamin Netanyahu hailed the new law as “a pivotal moment in the annals of Zionism and the State of Israel.”

He said: “We enshrined in law the basic principle of our existence. Israel is the nation state of the Jewish people, that respects the individual rights of all its citizens. This is our state — the Jewish state. In recent years there have been some who have attempted to put this in doubt, to undercut the core of our being. Today we made it law: This is our nation, language and flag.”

The most furious protests during the debate came from Arab lawmakers. 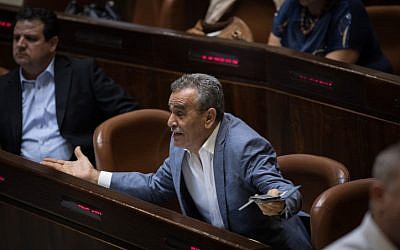 Joint (Arab) List MK Jamal Zahalka ripped a printed text of the bill to shreds from the podium.

“I declare with astonishment and sorrow the death of democracy… The funeral will take place today in the plenum,” his fellow party member Ahmad Tibi said in an Arabic statement.

Earlier on Wednesday night, Likud MK Amir Ohana, who chaired the committee that hammered out the bill, hailed the imminent passage of the law as a “defining moment in the history of the State of Israel, the one and only state of the Jewish people.”

He called the law “historic,” and said it received the most serious legislative treatment of all of Israel’s Basic Laws, having been debated and revised for over a year.

On Sunday, Netanyahu and Education Minister Naftali Bennett reached an agreement to cut a controversial clause, which allowed the state to “authorize a community composed of people having the same faith and nationality to maintain the exclusive character of that community,” and replace it with a new clause celebrating “Jewish settlement” in Israel in general terms.

Lawmakers amended the bill accordingly just hours before the final authorization, removing the clause sanctioning housing discrimination on the basis of ethnicity or religion.
Some of the last-minute changes to the bill came after politicians, legal advisers and others warned that several of its clauses were discriminatory and could cast a dark shadow over Israel in the international arena.

President Reuven Rivlin, whose position is generally considered to be symbolic, expressed concerns about the now-amended clause in a rare intervention in Israeli politics last week. In a letter to lawmakers, Rivlin warned the legislation in its previous form “could harm the Jewish people worldwide and in Israel, and could even be used as a weapon by our enemies.”

Judaism is already mentioned throughout the country’s laws and religious authorities control many aspects of life, including marriage. But the 11 existing Basic Laws deal mostly with state institutions like the Knesset, the courts, and the presidency, while Basic Law: Human Dignity and Liberty defines Israel’s democratic character.

First proposed in 2011 by Avi Dichter, then an opposition Knesset member with the centrist Kadima party and now a prominent Likud MK, the bill has seen numerous rewrites and parallel proposals.
Netanyahu enthusiastically threw his support behind the proposal, and had vowed for years that it would ultimately be passed into law.