The reason for the intense involvement of the Haredi establishment in preventing sex scandals can be attributed to the proliferation of Haredi news websites, which over the past decade have been exposing numerous cases of sexual misconduct of every flavor, in a community that until recently maintained a code of silence over such crimes... 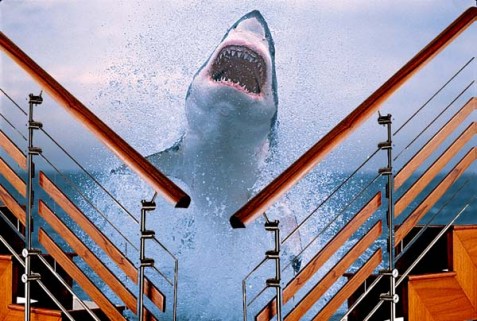 Following an increase in reported sex scandals in the Haredi community, rabbis and Mikvah managers have increased supervision in ritual baths using guards, compulsory modesty aprons in the saunas, and even cameras, Mosher Heller reported Sunday in Yedioth Jerusalem. According to Heller, mikvahcams and daytime supervisors have already been installed in Jerusalem baths.

Enhanced supervision of mikvahs is one of the ways the ultra-Orthodox establishment is dealing with reports of scandals in Jerusalem, both in and out of the mikvahs.

A source in the Haredi establishment who requested to maintain his anonymity has confirmed to JNi.media that just about every mikvah has a hidden camera. “No one cares about these pictures,” the source said, “they’re only there in case something happens, and then the value of having a record of the event far outweighs the issues of privacy.”

Apparently the mikvahcams are hidden from sight, using technology similar to nannycams that monitor how your babysitter treats your children when you’re away.

According to the Heller story, in the Shomrey Hakhomot mikvah in the Beit Israel neighborhood there are hidden cameras in the locker rooms, outside the showers, in the saunas and in the hallways. In many mikvahs the cameras are hidden over the dipping pools as well.

Access to the video records is restricted to certified rabbis, who may only watch the material in groups of three, and must verify their identities using their fingerprints.

A source told Heller that many regulars were upset to discover that they were being taped in their birthday suits. There was an outcry in Meah Shearim after a mikvah there announced that it had installed cameras “to maintain the sanctity of our camp.”

The most troublesome issue in daytime dipping in the mikvah, which is for men only, is the potential contact between unaccompanied children and adults. To this end the Skver mikvah in the Geula neighborhood in Jerusalem has hired a special daytime supervisor who walks in and out the small pool enclosures, monitoring the unsupervised children and “keeping an eye” on suspicious adults.

The reason for the intense involvement of the Haredi establishment in preventing sex scandals can be attributed to the proliferation of Haredi news websites, which over the past decade have been exposing numerous cases of sexual misconduct of every flavor, in a community that until recently maintained a code of silence over such crimes.

The Haredi websites avoid vulgar language and stay away from lurid pictures — they use code words, innuendo, even scriptural citations, to wink and nudge at their readers who have no problem understanding the full message. In the past three years intense competition among more than five such websites has pushed the reports of Haredi scandals to levels of exposure they never received since the prophet Nathan rebuked King David over the “poor man’s sheep.”

And that archaic scandal also began at the bath, you’ll recall…
JNi.Media

About the Author: JNi.Media provides editors and publishers with high quality Jewish-focused content for their publications.
Posted by Paul Mendlowitz at Friday, July 22, 2016 No comments: