Jewry accused of hiding sex-abuse - ''This is not reporting that a child is at risk, it is reporting a crime.''

Community leader and abuse whistleblower, Manny Waks. "Worse, in all of these new cases, those in positions of authority attempted to cover up these crimes."

TWO paedophiles - one reportedly the youngest person ever put on the Victorian Sex Offenders Register - were ''roaming the Jewish community'' with most members utterly unaware, the state inquiry into how religious groups handled child sex abuse was told on Monday.

Community leader and abuse whistleblower Manny Waks said there was overwhelming evidence that child sexual abuse was endemic in the Jewish community and ''the appalling way in which it has been mishandled'', including credible claims of continuing cover-ups.

He said that in the few months since his written submission there had been more serious allegations of child sexual abuse. ''Worse, in all of these new cases, those in positions of authority attempted to cover up these crimes.''

Mr Waks, a former vice-president of the Executive Council of Australian Jewry, last year became the first Jewish victim to publicly tell the story of his abuse, at Yeshivah College in Melbourne more than 20 years ago. He gave evidence with his father, Zephaniah Waks, but Family and Community Development committee chairwoman Georgie Crozier suppressed Mr Waks senior's testimony.

Manny Waks said several new allegations had come to him, partly because victims and families often sought his advice. In one case, he said, a family was forced to leave Melbourne under pressure from rabbis after they made allegations against a senior figure who ''is still roaming freely within the Melbourne Jewish community''.

In another case, a young member of the Jewish community was convicted of multiple counts of sexual assault against minors - becoming the youngest listed offender - and he too was freely roaming the community, Mr Waks said.

Another man, 36, was alleged to have sexually abused several children in the Yeshivah community - part of the Orthodox Chabad movement - and fled Australia as soon as he heard police were investigating him. Mr Waks said the man was himself allegedly sexually abused repeatedly as a child by a relative, an active member of the Sydney Jewish community.

In another Yeshivah case, a man, 30, is alleged to have abused a child, 13, about three years ago.

''Most devastatingly, over the past few days, I have been informed of a possible link between an alleged incident of child sexual abuse at Yeshivah and a subsequent suicide.''

He said he had also received a number of allegations of abuse and cover-ups within the Sydney and Perth communities.

Mr Waks said the Executive Council of Australian Jewry had ''done everything it could to downplay this scandal'' and that in some cases ''their scant response was highly damaging''.

He said he and other victims were deeply hurt, angry and incredulous not only about the abuse and the cover-ups, the intimidation of victims and their families, but the ''meek response'' by Jewish community leadership.

Dr Keating, a former head of Victoria's Department of Human Services, said a child protection worker to whom abuse was reported would have to advise telling police. ''This is not reporting that a child is at risk, it is reporting a crime.''

He said the Catholic Church abuse protocols, Towards Healing and the Melbourne Response, were perfectly designed to produce the results they did, protecting the church's reputation and wealth. ''In my experience the church authorities are entirely unencumbered by ethical or pastoral concerns.''

He said that despite church leaders' protestations that flourishing abuse was a thing of the past, their modern attitudes of clerical control, suppressing dissent, alienating women and persecuting gays meant sexual abuse was more likely.

http://www.theage.com.au/victoria/jewry-accused-of-hiding-sexabuse-20121210-2b5o7.html#ixzz2EiKkSjN1
Posted by Paul Mendlowitz at Monday, December 10, 2012 No comments: 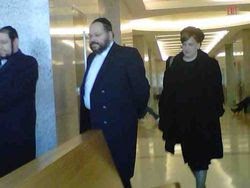 Weberman is facing a maximum of 25 years on prison of the top count alone, prolonged sexual conduct against a child - GUILTY 59 TIMES!!!

A Brooklyn jury found Nechemya Weberman - a prominent figure in the Satmar Hasidic community - guilty Monday of sexually abusing a rebellious young girl he was paid to counsel.

The verdict came after an explosive two-week trial, where customs of the strict Williamsburg-based sect were aired in Brooklyn Supreme Court.

He is facing a maximum of 25 years on prison of the top count alone, prolonged sexual conduct against a child.

Her yeshiva referred her to Weberman because she flouted her sect's strict modesty rules and asked probing questions about the existence of God.

But instead of guidance, she was molested at every opportunity.

"I wanted to die," she testified of her torment.

Prosecutors offered no physical evidence of the sexual activity that took place inside Weberman's home office, which the trial revealed had been a flop house for other wayward teenage girls.

The counselor took the stand in his own defense, insisting he "never ever" inappropriately touched the teen. But he was forced to acknowledge that funds from his charity were used to pay for his kids' tuition and buy lingerie.

The defense team claimed the victim's accusations were fueled by revenge, after Weberman teamed up with her father to film her in bed with a former boyfriend - then used the footage to get the boyfriend arrested for statutory rape.

That case was dropped shortly before she made her complaint against Weberman.

The high-profile case was rocked by allegations that Weberman and his henchmen tried to intimidate the accuser. Then during the trial, three men illegally snapped her photo while she was on the witness stand, and it ended up being posted online.

The sordid, soap opera-like revelations in court rocked the insular Satmar Sect, which derives its practices from a strict interpretation of Judaism. The trial was also a major challenge to Brooklyn District Attorney Charles Hynes, who came under criticism for his handling of sex abuse cases in the Orthodox Jewish community