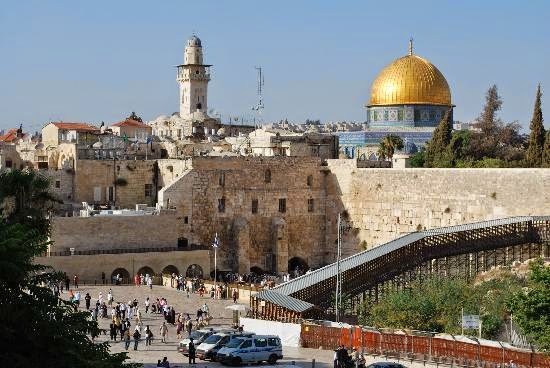 The world cannot stand the idea of Jewish sovereignty over Jerusalem

The deafening silence of the international community after last week’s terrorist attack in Jerusalem that claimed the lives of two people – including a three-month old baby – is in blatant contrast to the world's irrational reaction just days later to news of planned construction projects in the same city.
One must look into the matter more deeply to discover what drives the United States and European Union to enthusiastically and automatically protest every single time Jews announce plans to build homes in their historic capital, while these very same countries are silent when two innocent people are deliberately mowed down by a terrorist driven by anti-Semitic hatred.
If it were simply a question of politics equitably applied by Washington and European capitals across the globe – who would thereby condemn every construction announcement in disputed territories located in the remotest reaches of the world – one might conceivably believe in their good faith. But this would require the creation of ministries of "condemnation-of-construction-in-disputed-territories" in all these countries that would have to be equipped with full-time staff. In this case, however, the hypocrisy and malice emerge from all directions. Even the UN Security Council convened an emergency meeting to discuss the matter, even as other parts of the Arab Middle East are ablaze. There are no other cases like this in the world and it is specifically the Jewish state that is being targeted.
The aging West is gradually losing its bearing and its values. And despite all the problems that have beset it, it still believes it has enough free time to examine the small state of Israel's land policies under a microscope. Unconsciously, the West is condemning Israel's life instincts while tacitly supporting its enemies' death wishes. The conflict unfolding in the Middle East today expresses the struggle between two cultures: one that’s productive, developing, inventive, innovating, building and planting, the other that’s destructive, pillaging and sowing death. Israel is firmly on the side of life.
"We love death as you love life," Arab Palestinian terrorist chiefs frequently tell Israelis in order to make themselves seem “original.” A surrealist sentence for a modern, rational mind that Westerners are beginning to understand. Yet when it comes to Israel, the old knee-jerk reactions always come back: assassins become "freedom fighters" and builders are accused of "being an obstacle to peace."
Building housing units in the city that has been the capital of the Jewish people for over 3,000 years is a sign of life, rebirth and a breath of fresh air nationally-speaking after 19 centuries of absence. Building in Jerusalem is undoubtedly one of the most tangible and symbolic signs of the Jewish people's reunion with their homeland. For the past 2,000 years, the faithful recite the following Jewish prayer thrice daily: "Blessed art thou, God, who brings Your people Israel back from exile" and "Blessed art thou, God, who rebuilt Jerusalem." These prayers from the dawn of time are being fulfilled before our eyes much like the biblical prophecies. Wonderful!
And we should stop all this because American, British, Belgian, French or Spanish leaders ask us to? It is true that they have a notable alibi: the left and the mainstream Israeli media that are far ahead of them and encourage them in their opposition with the eternal "now is not the right time to build." In his inaugural winter Knesset session address, Israeli Prime Minister Benjamin Netanyahu was right to force the left to face up to its hypocrisy: "We've listened to you for years and it's never been the right time to build in Jerusalem."
Twenty years ago, a French rabbi warned that one day the United States – Israel's great ally – would turn against it on the issue of Jerusalem since Jewish sovereignty over the holy city is unbearable for both the Christian West and for Islam. We are there now and this is the real reason, albeit hidden and subconscious, behind the international community's hyper reactivity to any announcement of new construction in the Israeli capital. The use of the term "provocation" is not a given in the international community's terminology. The creation of the State of Israel in 1948 and the liberation of the Jews' historic birthplace were also "provocations" for all those who believed that the "Jewish question" was about to be "resolved."
Jerusalem has never been the capital of another state or another people and has never been more at the heart of the world's preoccupations since its rightful owners returned. During the 19-year Jordanian occupation of the city, between 1948 and 1967, there was never any question of making it a "Palestinian capital."
It is up to us, its rightful owners, to protect and develop our capital for the benefit of all its inhabitants, despite criticism and malicious condemnation.
Jerusalem is not only the capital of Israel, it is also the most precious capital of the entire Jewish people.
Shraga Blum is an independent journalist. He publishes a weekly press review in the "P'tit Hebdo" and political analysis on Israeli-French language sites.
http://www.i24news.tv/en/opinion/49207-141030-the-world-cannot-stand-the-idea-of-jewish-sovereignty-over-jerusalem
Posted by Paul Mendlowitz at Sunday, November 02, 2014