But at least the public verdict on Mr. Cosby is clear: He will be remembered as a very low sort of hypocrite — the self-styled exemplar of conservative family values exposed as a sexual predator... 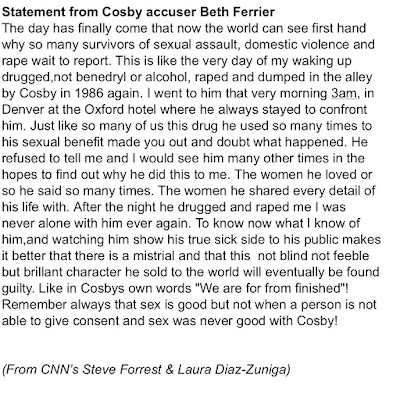 Bill Cosby and the Year of the Hypocrite


After 52 hours of jury deliberation, the case against Bill Cosby on charges of drugging and sexually assaulting Andrea Constand in 2004 ended on Saturday in a mistrial. But at least the public verdict on Mr. Cosby is clear: He will be remembered as a very low sort of hypocrite — the self-styled exemplar of conservative family values exposed as a sexual predator.

This is an old story, with plenty of antecedents in religion and politics. What’s chiefly new is that this is now a media story, as conservative power has moved from the pulpit and the pedestal to the TV screen.

Take Roger Ailes — the man who built Fox News by waging a ferocious culture war against an out-of-touch, liberal elite that did terrible things such as “waging war” on Christmas. Mike Huckabee, the former governor of Arkansas and an evangelical Christian, once praised the network for a “wholesomeness” that “starts at the top with Roger Ailes.” The reality was that what started at the top was a culture of pervasive sexual exploitation. Mr. Ailes, who died in May, was finally forced out of the network last July after Gretchen Carlson, Megyn Kelly and other women exposed his serial sexual harassment and coercion.

Then there was Bill O’Reilly, the former star host at Fox News. Night after night on Mr. Ailes’s network, Mr. O’Reilly railed against a national culture that had abandoned traditional values. This year, he published a book called “Old School,” featuring a section titled “No Means No” that offered guidance for how respectable men should relate to women. Elsewhere, he warned that while sexual favors might work in the short term, “sexual exploitation almost always leads to disaster.” Indeed.


After paying out $13 million to five women who accused him of sexual harassment over his career at Fox, the Murdochs finally pushed Mr. O’Reilly out of the company in April.

As for Mr. Cosby, he retained his image as cardigan-ed father figure for decades after “The Cosby Show” went off the air in 1992. The real-life Mr. Cosby went further, fashioning himself as a moral scold and frequently criticizing the black community for falling short of his ideas of virtue. In a 2004 speech to the NAACP he went after out-of-wedlock births, deadbeat dads, sagging pants and more.

The same year he gave that now notorious speech, he invited Ms. Constand to his Philadelphia mansion. When she arrived he gave her what he called three “friends” — herbal pills, he said, that would help her relax. (It’s the same word that Sweeney Todd uses for his razors before he slits the throats of his victims). Then Mr. Cosby allegedly assaulted her!

Mr. Cosby’s rank hypocrisy was the justification Judge Eduardo C. Robreno gave in July 2015 for his decision to unseal documents to The Associated Press from Ms. Constand’s 2005 civil suit against him. Mr. Cosby’s lawyers made the argument their client was not a public person; Judge Robreno argued that he was — and not “by virtue of the exercise of his trade as televised or comedic personality” but because he had “donned the mantle of public morality and mounted the proverbial electronic or print soap box.”

In doing so, wrote the judge, Mr. Cosby has “voluntarily narrowed the zone of privacy that he is entitled to claim.” Mr. Robreno concluded that “the stark contrast between Bill Cosby, the public moralist and Bill Cosby, the subject of serious allegations concerning improper (and perhaps criminal) conduct, is a matter as to which the AP — and by extension the public — has a significant interest.”

Something similar might be said about Mr. Ailes and Mr. O’Reilly, whose behavior not only violated legal standards and corporate codes but also the very brand of high-decibel moralizing on which they had built their network’s fortune and reputation. Conservatives are often fond of La Rochefoucauld’s famous aphorism that “hypocrisy is a tribute that vice pays to virtue,” and so tend to downplay hypocrisy as a sin. But in the marketplace of ideas they champion, hypocrisy may yet turn out to be the deadliest — or costliest — of sins.

Meanwhile, the district attorney in the Cosby case has already promised a retrial. Let’s hope that brings some measure of justice for Ms. Constand and the long line of victims she represents.